The California tiger salamander depends on vernal pools and other seasonal ponds and stock ponds for reproduction; its habitat is limited to the vicinity of large, fishless vernal pools or similar water bodies. It occurs at elevations up to 1000 m (3200 ft). Adults migrate at night from upland habitats to aquatic breeding sites beginning with the first major rainfall of fall and winter, and return to upland habitats after breeding.

Historically, the California tiger salamander probably occurred in grassland habitats throughout much of the state. It occurs from Sonoma County, especially in the Laguna de Santa Rosa (outside the floodplain), south to Santa Barbara County, in vernal pool complexes and isolated ponds along the Central Valley from Colusa County to Kern County, and in the coastal range. Both the Sonoma and Santa Barbara populations are listed as endangered since 2000 and 2003, respectively. On August 4, 2004, the US Fish and Wildlife Service listed the California tiger salamander as threatened within the Central DPS.

The loss of California tiger salamander populations has been due primarily to the loss of habitat and predators, such as American bullfrogs and access to breeding habitats. There is also a hybrid between the California tiger salamander and an introduced Barred Tiger Salamanders (Ambystoma tigrinum mavortium) which has been hybridizing for 50–60 years. 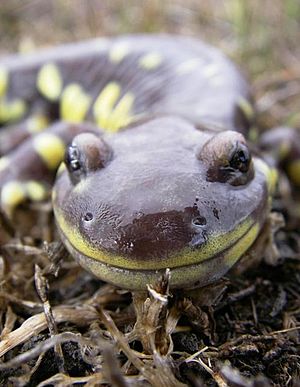 Adults spend the majority of their lives underground, in burrows created by other animals, such as ground squirrels and gophers; these salamanders are poorly equipped for burrowing. Little is known about their underground life. This underground phase has often been referred to as estivation (the summertime equivalent of hibernation), but true estivation has never been observed, and fiber optic cameras in burrows have allowed researchers to witness salamanders actively foraging. Adults are known to eat earthworms, snails, insects, fish, and even small mammals but adult California tiger salamanders eat very little. 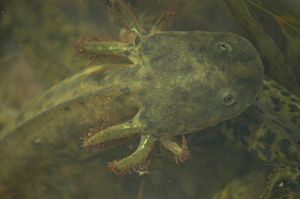 Breeding takes place after the first rains in late fall and early winter, when the wet season allows the salamanders to migrate to the nearest pond, a journey that may be as far as a 1.3 miles and take several days. The eggs, which the female lays in small clusters or singly, hatch after 10 to 14 days. The larval period lasts for three to six months. However, California tiger salamander larvae may also "overwinter". Transformation for overwintering larvae may take 13 months or more. Recent discoveries, such as overwintering, have management implications for this threatened species, particularly when aquatic habitats undergo modification. The larvae feed on other small invertebrates, including tadpoles. When their pond dries, they resorb their gills, develop lungs, and then the metamorphs leave the pond in search of a burrow.

"... the average female bred 1.4 times and produced 8.5 young that survived to metamorphosis per reproductive event, resulting in roughly 12 lifetime metamorphic offspring per female."

California tiger salamanders can live up to 15 years.

All content from Kiddle encyclopedia articles (including the article images and facts) can be freely used under Attribution-ShareAlike license, unless stated otherwise. Cite this article:
California tiger salamander Facts for Kids. Kiddle Encyclopedia.