Gutierrezia sarothrae is a species of flowering plant in the family Asteraceae known by the common names broom snakeweed, broomweed, snakeweed, and matchweed. It is a subshrub native to much of the western half of North America, from western Canada to northern Mexico, and can be found in a number of arid, grassland, and mountain habitats. It can be toxic to livestock in large quantities, due mainly to the presence of saponins.

Gutierrezia sarothrae is commonly confused with rabbitbrush, but can be distinguished by the presence of ray flowers, which rabbitbrush plants do not have.

Gutierrezia sarothrae is a perennial subshrub that ranges from 20 to 100 centimetres (7.9 to 39.4 in) in height. The stems are green to brown, bushy, and herbaceous, and branch upwards from a woody base. The stems die back during dormancy, giving the plant its broom-like appearance. They range from smooth to having some short hairs, and may be resinous and therefore sticky when touched. Dense clusters of small, yellow ray flowers form in clusters at the end of the stems from mid-July to September. As the stems are about the same length, this causes the plant to often appear domed or fan-shaped when flowering. The leaves are alternate and linear, and 5 to 60 millimetres (0.20 to 2.36 in) long and 1 to 3 millimetres (0.039 to 0.118 in) wide. The lower leaves are usually shed before the plant flowers. During its first year of growth, G. sarothrae produces a long, woody taproot, and numerous lateral roots as the plant matures. 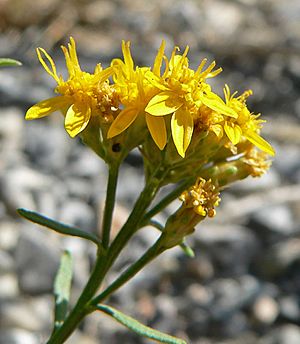 The flowers of G. sarothrae are pollinated by various insects, resulting in an oval fruit covered with chaffy scales. The plant reproduces from seeds, which are light, densely hairy, and wind-dispersed. A single plant is capable of producing over 9000 seeds annually, although most ripe seeds fall beneath the parent plant. Seeds can remain viable in the soil for several years; under laboratory conditions seeds have remained viable for at least two years.

Gutierrezia sarothrae, a native North American plant, is found throughout west-central Canada (the Prairie Provinces, the western and central United States (Great Plains and regions to the west), and northern Mexico as far south as Zacatecas and Baja California Sur. Due to its efficient water use and drought tolerance, it is able to survive in arid and semi-arid sites, such as rocky plains, dry foothills, ridgetops, mountain slopes, and in semi-desert valleys. Gutierrezia sarothrae is very adaptable, and can be found in a variety of ecoregions, including pinyon-juniper woodlands, desert shrublands, and sagebrush-grasslands. It can survive in a wide variety of soil types with full sun and good drainage, but growth is reportedly best in clay loams of alluvial slopes, and shallow, rocky, or sandy soil, and is poor in saline or alkaline soils.

Gutierrezia sarothrae was used by the Native Americans of the Great Plains for various reasons. The Comanche bound the stems together to make brooms. The Blackfoot used the roots in an herbal steam as a treatment for respiratory ailments. A decoction of the plant was used by the Lakota to treat colds, coughs, and dizziness, while a concentrate made from the flowers was used by the Dakota as a laxative for horses. The Navajo rubbed the ashes of G. sarothrae on their bodies to treat headaches and dizziness, and also applied the chewed plant to wounds, snakebites, and areas swollen by insect bites and stings. The Zuni used an infusion of the blossoms as a diuretic and to "make one strong in the limbs and muscles", and an infusion of the whole plant was used topically for muscle aches.

Gutierrezia sarothrae is a poor quality browse for most large ungulates. It is important to pronghorn antelope in some areas, especially during spring and summer, and can comprise up to 28% of the pronghorn antelope's diet. G. sarothrae is of little value to cattle and horses, but can be a fair quality winter browse for domestic sheep when there is little access to green forage.

Under natural conditions G. sarothrae quickly invades disturbed areas, and can minimize soil erosion; for example, it is reportedly able to stabilize loose wind-blown soils in mesquite sand dunes. It has been rated by the United States Fish and Wildlife Service as low to medium for erosion control potential, low for short-term revegetation potential, and low to medium for long-term revegetation potential.

Gutierrezia sarothrae can be toxic to domestic sheep, goats, and cattle when consumed in large quantities, although domestic goats are moderately resistant to G. sarothrae toxicity.

Gutierrezia sarothrae is one of the most widespread and damaging rangeland weeds, and can displace desirable vegetation if not properly managed. This displacement may be caused by livestock grazing, drought, or fire suppression. G. sarothrae quickly invades overgrazed rangeland, as cattle often leave it untouched while overgrazing grasses. Because of this, an abundance of G. sarothrae is considered to be an indicator of rangeland deterioration. It is a fire intolerant species, and is severely harmed or killed by fire; immediately after a fire it may be completely removed from an area. However, seeds can remain viable if in the soil, often causing G. sarothrae densities to increase after a fire. This may make it necessary to burn at five to ten year intervals in order to reduce its populations.

Herbicide effectiveness is variable; when herbicide application is effective, populations are controlled for up to five years. Mechanical control is generally ineffective; hoeing the plants just below the soil can be effective, but may be impractical in stony soil. Biological control has also been studied, with a combination of an Argentinean root-boring weevil, Heilipodus ventralis, and an Argentinean moth root-borer, Carmenta haematica, found to be an effective method of control.

All content from Kiddle encyclopedia articles (including the article images and facts) can be freely used under Attribution-ShareAlike license, unless stated otherwise. Cite this article:
Gutierrezia sarothrae Facts for Kids. Kiddle Encyclopedia.