Comet Hale–Bopp (formally designated C/1995 O1) is a comet that was perhaps the most widely observed of the 20th century, and one of the brightest seen for many decades.

Hale–Bopp was discovered on July 23, 1995 separately by Alan Hale and Thomas Bopp prior to it becoming naked-eye visible on Earth. Although predicting the maximum apparent brightness of new comets with any degree of certainty is difficult, Hale–Bopp met or exceeded most predictions in April 1, 1997. It was visible to the naked eye for a record 18 months, twice as long as the previous record holder, the Great Comet of 1811. Accordingly, Hale–Bopp was dubbed the Great Comet of 1997.

The comet was discovered independently on July 23, 1995 by two observers, Alan Hale and Thomas Bopp, both in the United States.

Hale had spent many hundreds of hours searching for comets without success, and was tracking known comets from his driveway in New Mexico when he chanced upon Hale–Bopp just after midnight. Once he had established that the object was moving relative to the background stars, he emailed the Central Bureau for Astronomical Telegrams, the clearing house for astronomical discoveries.

Bopp did not own a telescope. He was out with friends near Stanfield, Arizona observing star clusters and galaxies when he chanced across the comet while at the eyepiece of his friend's telescope. He realized he might have spotted something new when, like Hale, he checked his star maps to determine if any other deep-sky objects were known to be near M70, and found that there were none. The following morning, it was confirmed that this was a new comet. 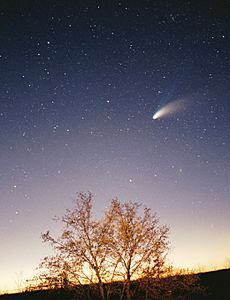 The comet became a spectacular sight in early 1997

Hale–Bopp became visible to the naked eye in May 1996, and although its rate of brightening slowed considerably during the latter half of that year, scientists were still cautiously optimistic that it would become very bright. It was too closely aligned with the Sun to be observable during December 1996, but when it reappeared in January 1997 it was already bright enough to be seen by anyone who looked for it, even from large cities with light-polluted skies.

The Internet was a growing phenomenon at the time, and numerous websites that tracked the comet's progress and provided daily images from around the world became extremely popular. The Internet played a large role in encouraging the unprecedented public interest in comet Hale–Bopp.

As the comet approached the Sun, it continued to brighten, and showing a growing pair of tails, the blue gas tail pointing straight away from the Sun and the yellowish dust tail curving away along its orbit.

As it passed perihelion on April 1, 1997 the comet developed into a spectacular sight. It shone brighter than any star in the sky except Sirius, and its dust tail stretched 40–45 degrees across the sky. The comet was visible well before the sky got fully dark each night, and while many great comets are very close to the Sun as they pass perihelion, comet Hale–Bopp was visible all night to northern hemisphere observers.

The last naked-eye observations were reported in December 1997, which meant that the comet had remained visible without aid for 569 days, or about 18 and a half months. The previous record had been set by the Great Comet of 1811, which was visible to the naked eye for about 9 months.

Scientists found lots of organic chemicals in Hale-Bopp which they never saw before. It was also the first comet that had the gas argon in it. It also has a sodium tailand which extended to some 50 million kilometres in length. See the picture on the left.

The abundance of deuterium in comet Hale–Bopp in the form of heavy water was found to be about twice that of Earth's oceans. If Hale–Bopp's deuterium abundance is typical of all comets, this implies that although cometary impacts are thought to be the source of a significant amount of the water on Earth, they cannot be the only source. 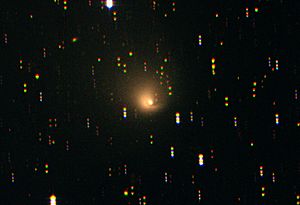 Comet Hale–Bopp, at a distance of nearly two billion kilometres from the Sun. Credit: ESO

Its lengthy period of visibility and extensive coverage in the media meant that Hale–Bopp was probably the most-observed comet in history, making a far greater impact on the general public than the return of Halley's Comet in 1986, and certainly seen by a greater number of people than witnessed any of Halley's previous appearances. For instance, 69% of Americans had seen Hale–Bopp by April 9, 1997.

Hale–Bopp was a record-breaking comet—the farthest comet from the Sun discovered by amateurs, with the largest well-measured cometary nucleus known after 95P/Chiron, and it was visible to the naked eye for twice as long as the previous record-holder. It was also brighter than magnitude 0 for eight weeks, longer than any other recorded comet.

All content from Kiddle encyclopedia articles (including the article images and facts) can be freely used under Attribution-ShareAlike license, unless stated otherwise. Cite this article:
Comet Hale–Bopp Facts for Kids. Kiddle Encyclopedia.