Harpullia is a genus of about 27 species of small to medium-sized rainforest trees from the family Sapindaceae. They have a wide distribution ranging from India eastwards through Malesia, Papuasia and Australasia to the Pacific Islands. They grow naturally usually in or on the margins of rainforests or associated vegetation.

The major centre of diversity, of about twenty species, occurs throughout New Guinea including its surrounding islands and region.

Australia harbours another centre of smaller diversity, of about eight species, growing naturally from northeastern New South Wales through eastern Queensland to Cape York Peninsula and coastal Northern Territory. Of the eight Harpullia species which grow naturally Australia six occur only (endemic) in Australia. They have the common name tulipwoods and were prized for their dark coloured timber. The one most commonly known to Australian horticulture is Harpullia pendula which is widely planted as a street tree along the east coast. H. frutescens is a small shrub with horticultural potential.

European science formally published the name and description of this genus and its H. cupanioides type specimen from India, in 1824, authored by Scottish botanist William Roxburgh. The genus name, Harpullia, derives from "Harpulli, "the vernacular name at Chittagong".

Recently in 2011 Japanese–American botanist Wayne Takeuchi formally published the name and description of H. mabberleyana, the "first member of the genus to be discovered in New Guinea since 1940".

In 1985 and 1981 Australian botanist Sally T. Reynolds published updated names, known records and descriptions of the eight Australian species, in the Flora of Australia (series) and her scientific article, respectively.

In 1985 J. Mueller published a pollen anatomy and evolution study of the genus. 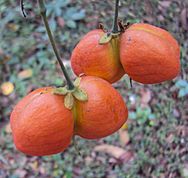 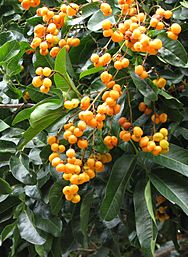 All content from Kiddle encyclopedia articles (including the article images and facts) can be freely used under Attribution-ShareAlike license, unless stated otherwise. Cite this article:
Harpullia Facts for Kids. Kiddle Encyclopedia.