Harrisimemna trisignata, or Harris's three spot, is a moth of the family Noctuidae. The species was first described by Francis Walker in 1856. It is found in North America from Ontario, Quebec, New Brunswick, Nova Scotia, Newfoundland and Labrador, Alberta and Saskatchewan, south to Arizona. In the United States it has been recorded in Maryland, Pennsylvania, Wisconsin, Georgia, Illinois, Indiana, Iowa, New York, Ohio, Oklahoma, Tennessee, Texas and Virginia.

The wingspan is 30–36 mm. Adults are on wing from May to August in Canada. 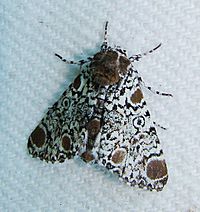 All content from Kiddle encyclopedia articles (including the article images and facts) can be freely used under Attribution-ShareAlike license, unless stated otherwise. Cite this article:
Harrisimemna trisignata Facts for Kids. Kiddle Encyclopedia.