Harvey is bordered by Dixmoor and Riverdale to the north, Dolton, Phoenix, and South Holland to the east, East Hazel Crest to the south, and Hazel Crest, Markham and Posen to the west. 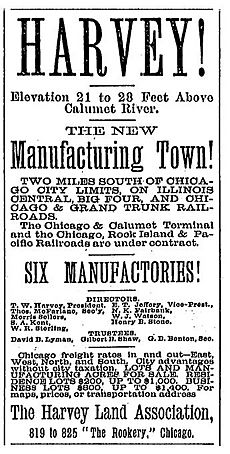 Advertisement by The Harvey Land Association that appeared on November 8, 1890 in the Chicago Daily Tribune.

Harvey was founded in 1891 by Christian leader Turlington W. Harvey, a close associate of Dwight Moody, the founder of the Moody Bible Institute in Chicago. Harvey was originally intended as a model town for Christian values and was one of the Temperance Towns; it was closely modeled after the company town of Pullman, which eventually was annexed into the city of Chicago.

The city saw its greatest growth during the 1950s, but by the 1990s it was losing population and its economy was in decline.

In the 2000s and 2010s, Mayor Eric Kellogg attempted to boost Harvey's economy with little success. Kellogg offered developers millions of dollars in incentives to revive the long vacant Dixie Square Mall. In another plan to redevelop the Chicago Park Hotel, a developer was given $10 million from the city but then abandoned the project, leaving behind a gutted building.

There were 8,990 households out of which 39.1% had children under the age of 18 living with them, 36.4% were married couples living together, 31.8% had a female householder with no husband present, and 24.8% were non-families. 20.7% of all households were made up of individuals and 7.1% had someone living alone who was 65 years of age or older. The average household size was 3.30 and the average family size was 3.80.

The Dixie Square Mall, an abandoned shopping mall in Harvey, was the location where the famous car chase scene in the movie The Blues Brothers was shot. Although the mall was closed in November 1978, the makers of the film convinced the city to allow them to shoot the scene. The mall was remodeled and filled with stores for two days in order to shoot the scene. After filming was completed, the mall was boarded up and closed again. The main precinct of the Harvey Police Department was built on part of the old parking lot during the 1990s.

All content from Kiddle encyclopedia articles (including the article images and facts) can be freely used under Attribution-ShareAlike license, unless stated otherwise. Cite this article:
Harvey, Illinois Facts for Kids. Kiddle Encyclopedia.