Hawkinge ( HAW-kinj) is now a town and civil parish in the Folkestone and Hythe district of Kent, England. The original village of Hawkinge is actually just less than a mile (c. 1.3 km) due east of the present village centre (roughly 51° 6'55.14"N, 1°11'2.00"E); the modern, much larger, village of Hawkinge was formed by the merging of Hawkinge and Uphill. Walking south from the village past it is possible to see stunning views of Cheriton, Folkestone and the Channel Tunnel complex.

During World War II, RAF Hawkinge was the closest operational airfield to France and was used during the Battle of Britain. The airfield is now the site of extensive residential development, which has expanded Hawkinge's population to 9,000. Depending on further building, the population is still expected to grow to 11,000. The construction of the houses was hampered by the discovery of several pipe bombs, put there in the event of a German invasion to render the airfield useless to enemy airplanes. There are several reminders of the war in and near the site of the original village; the Kent Battle of Britain Museum and various pillboxes are scattered amongst the farms.

Hawkinge Cemetery is near the site of the aerodrome and most of the 95 Second World War casualties buried there were airmen. About a quarter were killed during the Battle of Britain. Most of the war graves are in a special plot east of the chapel, including 59 German graves, which are together in a group at the south-eastern corner.

The A260 which runs from Folkestone to Barham, where it meets with the A2 to Canterbury originally ran through the centre of the village, before it was replaced with a new bypass opened by Michael Howard on Monday 9 July 2007. The southern section, built in the early 2000s, leads from the A20 to a roundabout where it meets with the northern section. This new section carries traffic around the village centre onto the existing road. 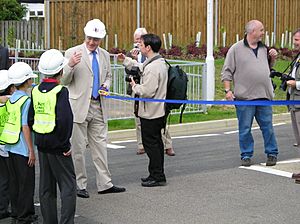 There is a regular bus service that connects the village to either Folkestone or Canterbury. These are normally run by Stagecoach and have route numbers 19, 16 & 73 (Easy Access Bus).

All content from Kiddle encyclopedia articles (including the article images and facts) can be freely used under Attribution-ShareAlike license, unless stated otherwise. Cite this article:
Hawkinge Facts for Kids. Kiddle Encyclopedia.