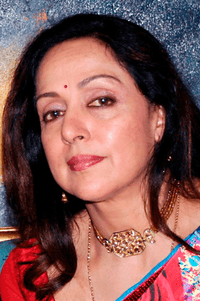 She is known for starring in many Bollywood movies with her husband Dharmendra and with Rajesh Khanna and Dev Anand. She played the "Dream Girl" in the movie of the same name. She has played both comedy and dramatic roles, as well as being a dancer. She was one of the highest paid Indian actresses from 1976 to 1980.

All content from Kiddle encyclopedia articles (including the article images and facts) can be freely used under Attribution-ShareAlike license, unless stated otherwise. Cite this article:
Hema Malini Facts for Kids. Kiddle Encyclopedia.