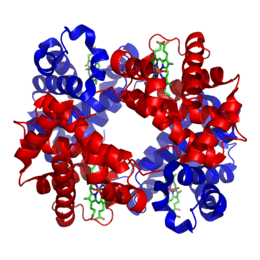 When two genes, the delta and beta globin gene loci become crossed or mixed-up a mutation happens which causes the Hb Lepore trait.

Hemoglobin Lepore syndrome (Hb Lepore) is a kind of blood disorder that is caused by a genetic mutation. It was first found in an Italian-American family named Lepore. When a genetic mutation runs in families it is known as a trait.

The Hb Lepore trait is found worldwide and may affect people of various races, however the three main kinds of Hb Lepore, usually affects Caucasians of the Southern regions of Central and Eastern Europe.

All content from Kiddle encyclopedia articles (including the article images and facts) can be freely used under Attribution-ShareAlike license, unless stated otherwise. Cite this article:
Hemoglobin Lepore syndrome Facts for Kids. Kiddle Encyclopedia.