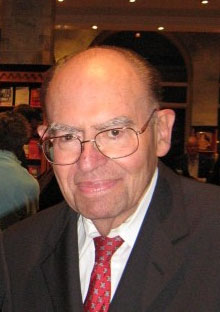 The Right Honourable Herbert Eser "Herb" Gray PC CC QC (May 25, 1931 – April 21, 2014) was a Canadian politician and lawyer. He was a cabinet minister and served under three prime ministers. He was the Deputy Prime Minister of Canada from 1997 until 2002, when Jean Chrétien was Prime Minister. He was also Canada's first Jewish federal cabinet minister.

Gray was born in Windsor, Ontario. He was married to Sharon Sholzberg and had two children.

All content from Kiddle encyclopedia articles (including the article images and facts) can be freely used under Attribution-ShareAlike license, unless stated otherwise. Cite this article:
Herb Gray Facts for Kids. Kiddle Encyclopedia.