Heyburn is a city in Minidoka County, Idaho, United States. The population was 3,089 at the 2010 census. It is part of the Burley micropolitan area. 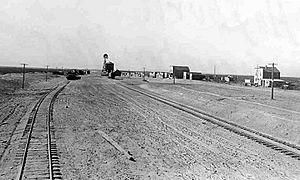 There were 1,109 households, of which 38.5% had children under the age of 18 living with them, 58.3% were married couples living together, 10.6% had a female householder with no husband present, 6.0% had a male householder with no wife present, and 25.2% were non-families. 21.9% of all households were made up of individuals, and 7.9% had someone living alone who was 65 years of age or older. The average household size was 2.79 and the average family size was 3.26.

Heyburn's economy is largely influenced by its close proximity to the city of Twin Falls. The region’s prominent agricultural and distribution sector saw a huge boost in 2012 when Chobani opened the world’s largest yogurt processing facility in nearby Twin Falls. The plant represents an investment of $450 million and employs over 1,000 people. Heyburn has also recently become home to a Gem State Processing potato plant and the Double L harvest equipment manufacturer. Additionally, companies such the Packaging Corporation of America have seen employment rise as new businesses seek out their services, according to Kae Cameron, past executive director of the Mini-Cassia Chamber of Commerce.

Heyburn is served by the Minidoka County Schools system.

Children are zoned to:

All content from Kiddle encyclopedia articles (including the article images and facts) can be freely used under Attribution-ShareAlike license, unless stated otherwise. Cite this article:
Heyburn, Idaho Facts for Kids. Kiddle Encyclopedia.