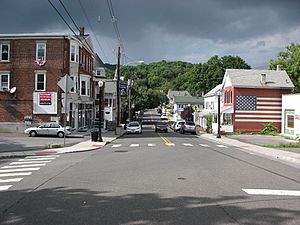 The borough is located on the South Branch of the Raritan River in the north central part of Hunterdon County. Water from the South Branch was a valuable power source for one of the first ironworks in the United States, established in the 1740s by William Allen and Joseph Turner of Philadelphia. Allen was the mayor of Philadelphia, a Chief Justice of Pennsylvania, and a prominent landowner in New Jersey. In 1859, the Central Railroad of New Jersey began a five-year construction project of a 112-foot (34 m) high, 1,300-foot (400 m) long bridge across the river from which structure the locality ultimately took its name.

Unincorporated communities, localities and place names located partially or completely within the township include Jericho Hill, Pierce Heights and Silverthorn.

There were 1,418 households out of which 33.6% had children under the age of 18 living with them, 58.3% were married couples living together, 9.0% had a female householder with no husband present, and 29.2% were non-families. 22.9% of all households were made up of individuals, and 5.3% had someone living alone who was 65 years of age or older. The average household size was 2.57 and the average family size was 3.06.

There were 1,428 households, out of which 39.9% had children under the age of 18 living with them, 62.3% were married couples living together, 8.5% had a female householder with no husband present, and 26.4% were non-families. 20.9% of all households were made up of individuals, and 4.8% had someone living alone who was 65 years of age or older. The average household size was 2.64 and the average family size was 3.10. 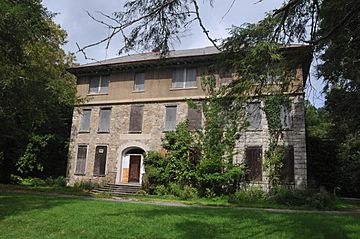 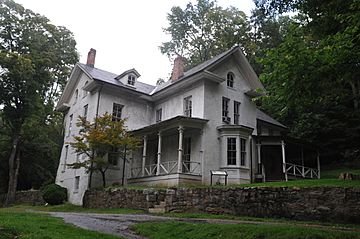 High Bridge serves as the southern terminus of a rail trail that was created out of the former Central Railroad of New Jersey High Bridge Branch. The trail is maintained by Hunterdon County Parks and Recreation and is called the Columbia Trail. The trail runs northeastward from the center of the borough (at the junction of Main Street and Church Street) towards Califon, through a scenic area outside the borough limits, known as the Ken Lockwood Gorge.

Union Forge Park is High Bridge's main public park, located across the Raritan River from Taylor Wharton. Another park is the Borough Commons, situated at the start of the Columbia Trail. A grant received by the Union Forge Heritage Association in 2008 provided for the creation of the Taylor Steelworkers Historical Greenway, which stretches 5 1⁄4 miles (8.4 km) around the borough, starting at Columbia Trail and connecting the borough's parks and other historic sites.

The High Bridge Hills golf course, located near Route 31, provides another means of recreation in the small town.

CR 513 is the main road that passes through and connects to Route 31 to the west.

Interstate 78 is accessible via Routes 513 and 31 in neighboring Clinton Township.

Originally a vital junction for the Central Railroad of New Jersey in hauling iron ore from northern New Jersey via its High Bridge Branch which headed north toward Wharton, High Bridge now serves as the westernmost station on NJ Transit's Raritan Valley Line. It is located at the southern end of the station. The parking lot for the station is located one block to the west. The station only uses the southern track for inbound and outbound trains. There is a station building that is no longer used and there are two small shelters. This station has limited weekday service and no weekend service. The station has been the western terminus of the line since 1983, the year NJT commenced operations. Between 1983 and 1989, NJT reached Phillipsburg, New Jersey on the former Central Railroad of New Jersey mainline. Since that time, the route between High Bridge and Phillipsburg has been inactive. NJT considers making plans for bringing service back to Phillipsburg again in the future.

Solitude House, built circa 1710-1725, became the centerpiece of the iron plantation that became Union Forge Ironworks. Later called Taylor Iron and Steel Company, it eventually became known as Taylor-Wharton. John Penn, the last royal governor of Pennsylvania, and Benjamin Chew, the last Chief Justice of the Supreme Court of Pennsylvania, were political prisoners at Solitude House during the American Revolutionary War. Five generations of the Taylor family managed the business and continued to live in the house, until 1938. Acquired by the Borough in 2001, and previously operated as a museum, the house is currently closed due to a lease dispute. The Union Forge Heritage Association operated Solitude House Museum from 2002 to 2012.

The TISCO Headquarters, constructed in 1742 for the Union Iron Works, is the oldest office building in New Jersey.

Lake Solitude dam, replacing the crib dam of 1858, replaced in 1909, is the last remaining example of a buttress dam in New Jersey, built by master engineer Frank S. Tainter.

Springside Farm, was established in 1803, by Archibald S. Taylor, as the agricultural farm of the Taylor Iron and Steel Company.

High Bridge has a downtown (Main Street) that is home to eateries, services and professionals. Circa Restaurant, at the center of Main Street, has received acclaim from a variety of sources including a food editor from The New York Times who proclaimed, "Circa is the kind of place I wish were in my town."

The businesses are collectively marketed by the High Bridge Business Association, which assists its member businesses through co-operative advertising, press releases, goodwill and other benefits.

The High Bridge School District serves students in pre-kindergarten through eighth grade. As of the 2018–19 school year, the district, comprised of two schools, had an enrollment of 370 students and 38.2 classroom teachers (on an FTE basis), for a student–teacher ratio of 9.7:1. Schools in the districts (with 2018–19 enrollment data from the National Center for Education Statistics) are High Bridge Elementary School with 194 students in grades PreK - 4 and High Bridge Middle School with 178 students in grades 5 - 8.

Public school students in ninth through twelfth grades attend Voorhees High School, which also serves students from Califon, Glen Gardner, Hampton, Lebanon Township and Tewksbury Township. As of the 2018–19 school year, the high school had an enrollment of 982 students and 83.1 classroom teachers (on an FTE basis), for a student–teacher ratio of 11.8:1. The school is part of the North Hunterdon-Voorhees Regional High School District, which also includes students from Bethlehem Township, Clinton Town, Clinton Township, Franklin Township, Lebanon Borough and Union Township who attend North Hunterdon High School in Annandale.

People who were born in, residents of, or otherwise closely associated with High Bridge include:

All content from Kiddle encyclopedia articles (including the article images and facts) can be freely used under Attribution-ShareAlike license, unless stated otherwise. Cite this article:
High Bridge, New Jersey Facts for Kids. Kiddle Encyclopedia.