Hoplobatrachus tigerinus, the Indus Valley bullfrog or Indian bullfrog, popular name Asian bullfrog, Asean bullfrog or Asia bullfrog, is a large species of frog found in Myanmar, Bangladesh, India, Pakistan, Afghanistan, and Nepal. It has been introduced in Madagascar, where it is now a widespread invasive species. 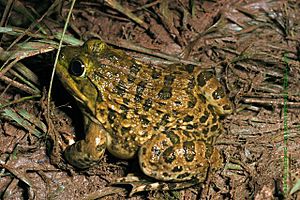 They are found in India, Bangladesh, Pakistan, Nepal, Myanmar, Afghanistan, and Sri Lanka. They are also found in the Maldives and Madagascar.

Rana tigrina is mostly solitary and nocturnal in nature. They inhabit holes and bushes near permanent water sources. The frog does not stay in water for a long time; it spends most of its time hiding and feeding in surrounding vegetation. Diet is various type of insects, invertebrates, mice, shrews, young frogs, earthworms, roundworms, juvenile snakes, and small birds.

It is essentially aquatic, and is said, to jump over the surface of the water much in the same way as on land when frightened. From snout to vent 6.5 inches. This species is classified as Least Concern in the IUCN red list.

Captive farming of this species as a food source, and also of the American bullfrog (Rana catesbeiana), started in Thailand in the 1990s.

All content from Kiddle encyclopedia articles (including the article images and facts) can be freely used under Attribution-ShareAlike license, unless stated otherwise. Cite this article:
Indus Valley Bullfrog Facts for Kids. Kiddle Encyclopedia.