Howardsville is an unincorporated community in Albemarle County, Virginia.

Howardsville is named after one of its principal founders, Allen Howard, who settled the northern bank of the James River at the point where the Rockfish River, its largest tributary, enters its flow. Along with other families, such as the Andersons, Jordans, Cabells and Childresses, both sides of the river were settled by people moving up from the lower James to plant new lands with tobacco and other crops in the 1730s and 1740s. The area was also known for its limestone and iron ore deposits and a forge of some sort was established in the settlement from a very early date.

There is a stream that flows through the community called the Mullinax, which is probably an Indian word and may denote the name of an Indian village on this site that predated European settlement. Dozens of arrowheads, spearheads, stone bowls and other Indian artifacts have been found in the area. Probably the first contact Europeans had with the area were fur traders making their way up river from Indian village to village.

The original community consisted of several large and medium plantations, as well as a landing for batteaux poling up and down the river. More settlers rapidly settled up the Rockfish River and along both sides of the James. In the mid-18th century, a road was cut along the north bank of the James - the James River Road - and another wound up the Rockfish to meet Secretary Sands' Road, which cut through the southern part of Albemarle County.

The settlement, probably called Howard’s Landing at the time, was created prior to the founding of Albemarle County so, along with Scottsville, a little further down river, is one of the founding communities of the county. It remains unique for being almost unchanged since the mid-18th century and early 19th century, with its two original historic plantation homes, one of the earliest Masonic Lodges in the state and also one of its earliest Methodist halls. The old tobacco prizery is still there, although its upper stories were burned down by Sheridan during the Civil War. The old Howardsville Bank is also there, which printed its own bank notes and was a Civil War hospital and general store for much of its history. Both buildings date from the middle 18th century. 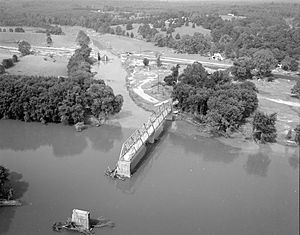 The confluence of the Rockfish and James Rivers at Howardsville, showing flooding damage in the aftermath of Hurricane Camille

The small 19th-century post office building has been preserved, and the school, dating from the early 20th century, is now a well-preserved private residence. Other notable buildings include Social Hall, once owned by relatives of Colonel Moseby, who practiced law there for a few years and met his wife, who was part of the Howardsville community at the time.

During the 1760s, the landing became the site of a store established by the Scottish tobacco barons of Glasgow, who set up these trading posts all along the rivers of Virginia. The store sold goods to the planters in exchange for their tobacco crops and there was a large, secure warehouse built to house its valuable goods. Batteaux would work up and down the river bringing everything from iron pots to fine fabrics that the planters’ homes turned into dresses, bedcovers and curtains. They also brought more settlers, along with their indentured servants and slaves.

The planters, anxious to acquire more land and to display the signs of their new wealth as rapidly as possibly, soon fell into large debt with the store, which was run for most of its history by a young Scotsman called Charles Irving. Irving married one of the local Jordan girls, built a large house and ended up buying extensive tracts of land in the area, often in lieu of debts. Irving was literate and well-educated and his signature witnessed many of the deeds of the late 18th century, both for land transactions, wills and other legal settlements. Descendents of his still live on old family land on the south bank of the river.

During the American Revolution, the village was known as Irving's Store. Because of its large, secure brick warehouse, its foundry, and other secure brick buildings, as well as its central location on the James River, with roads heading both east-west and north-south, it became one of the storage depots for the Virginia Militia and several letters of the time from the major in command at Irving's Store talk of difficulties in supplying the militia with armaments because of the low level of the river and lack of boats to transport goods. The foundry would have been useful to make bayonets and repair muskets and other military equipment. It is also mentioned that British cavalry under Colonel Tarleton tried to make a raid up the river from Richmond to destroy the arms depot.

During the early years of the 19th century, the community grew into a small town. It was on a prime location at the confluence of two rivers. Soapstone had been found just up the Rockfish River and was now being mined and the local planters were growing rich on tobacco. So, when the James River and Kanawha Canal was built through the town in the 1830s, the land around the canal was divided into lots and sold off, stores were built, two mills were erected, and there was a canal boat basin - probably for minor repairs and to store boats that were not using the canal. There was a lock and an aqueduct erected over the Rockfish, and a lock-keeper's cottage was built. It is from this period that the name 'Howardsville' was first used.

Within ten years of the canal coming to the town, local investors set up the Howardsville and Rockfish Gap Turnpike Company and during the 1840s cut a road from the river over the Blue Ridge Mountains and across the Shenandoah Valley south of Staunton all the way to the Appalachians. But the turnpike was never successful. Heavy rains washed out the road surface and the company found it hard to collect tolls, so the state soon rescinded its license to charge users and within a few years the scheme was abandoned. But the route of the old turnpike was used for many years and is still used today, in many parts.

The 1840s and 1850s were a thriving time for the community. There was the canal, the turnpike, the foundry and mills, as well as a tobacco grading and prizing station that handled up to 500 hogsheads of tobacco a year - a huge amount. Boat captains settled in the town, a bank was set up - one of the most solvent and successful in the state of Virginia at the time. There was also a James River Insurance Company that insured packet boats, homes, barns, and slaves - and there is extant a list of all the rates to insure slaves of different ages from a range of various disabilities.

Monticola, owned by Daniel Hartsook, cashier of the bank, owner of the insurance company, and chief investor in the turnpike company, was built at this time, and West Cote, the other stately home of the community, was also built then, replacing an earlier dwelling on the site. There were at least two hotels, a livery stable, and several stores.

During the Civil War, the foundry is known to have made sabers for the Confederate cavalry and a captain of cavalry was sent to the town to supervise their production. The town also supplied Lee’s forces with food and the canal ran military supplies to his forces continuously during the war years, especially supplying Lee's army in Richmond during the last year of the war.

Because of its industry and location on the canal, Union cavalry under Sheridan, which including a column led by George Custer, raided the Howardsville-Scottsville area in the spring of 1864, burning bridges, the foundry, the mills and several the houses. It burned and smashed the lock gates and aqueduct, destroyed canal boats carrying food and military supplies, raided the bank - though its gold had been secreted away just hours before the Union troops arrived – and Sheridan set up house in Monticola while his men pillaged the surrounding area.

The invaders remained in the area for two-three days, raiding up and down the north bank of the James, unable to cross because the river was in spate and locals had destroyed all the bridges that crossed it. Triumphant, they eventually headed east down the river, to then turn northeast and circle Richmond to rejoin Grant's army.

After the Civil War, the bank was no more. The turnpike was in a state of dilapidation. The canal was replaced by the C&O railway line, which built a station there, and the community struggled to regain its former glory. It remained a small center that served the local farmers with goods and shipped their produce to market. There was a train depot and several stores, a doctor and a post office, a school and a small library. There was also a mercantile business, a saw mill, and the foundry was still in production, where it made ploughshares and other peacetime implements, as well as blacksmiths, a lawyer or two, a hotel, all of which served the local farming community. Although a road bridge was built over the James River about 1911 to replace the old ferry, the community continued to decline. The foundry soon closed, the mercantile business struggled, the hotels had little business and the stores began to look a dowdy and rundown.

The station and the stately home of Monticola, which is close by, featured in the 1941 movie "Virginia" that starred Fred MacMurray and Madeleine Carroll, with one scene taking place at the train depot and numerous scenes being shot at the old home on the hill. The filmmakers liked the slightly quaint and old-fashioned, but preserved, quality of the area.

Howardsville’s population did not grow significantly during this time, and with the general urbanization of the 1950s, the community fell into decline. When Hurricane Camille hurtled down the Rockfish River in 1969 and swept away all the lower town that rested along the James River, many of the stores and the hotels were already in ruin or decline. The hurricane, which rose the James River by over 30 feet and inundated all the homes in the lower town, merely finished the job. It swept away part of the road bridge over the James, completely took out the road and rail bridges over the Rockfish, and left a deluge of mud and torn up trees across the entire river floodplain.

Today, the village community is about 25 persons strong, but there is a wider area that associates with Howardsville and partakes in its social activities. The oldest, most historic homes, which were sheltered from hurricanes Camille and Agnes, remain, lovingly restored by their present owners. The current village is on the Virginia Birding Route and the Virginia Cycle Route. There is a bed and breakfast establishment and local farmers produce goat cheese, bread and other crops, though forestry is the main agricultural produce of the area. Soapstone is still quarried in nearby Schuyler. It has its own boat ramp, where kayakers, canoers and fishermen can embark and land. As such, it remains one of the quaintest, most unspoilt villages of central Virginia.

Monticola and West Cote are listed on the National Register of Historic Places.

All content from Kiddle encyclopedia articles (including the article images and facts) can be freely used under Attribution-ShareAlike license, unless stated otherwise. Cite this article:
Howardsville, Albemarle County, Virginia Facts for Kids. Kiddle Encyclopedia.