Howbert is a defunct community that existed from 1887 to 1933 in southeastern Park County in central Colorado. Begun as an outpost of the former Colorado Midland Railway, it was named for Irving Howbert, who was an organizer and officer of Colorado Midland, a former member of the Colorado State Senate, a banker, silver mine owner, and a founder with General William Jackson Palmer of Colorado Springs. Irving Howbert never lived in the community. Howbert and two nearby communities were fully submerged under Eleven Mile Reservoir in Eleven Mile State Park.

Howbert was a ranching outpost, where an eight-thousand-head cattle sale was concluded in August 1907. The community was first called Dell's Camp, presumably for B. R. Dell, who had opened a general store there before the arrival of the railroad. The United States Post Office opened in Howbert in December 1887. The next year, 125 lots were platted on land owned by James M. Petty. To accommodate growth in the community, Dell constructed a three-story building in 1888. The store and post office operated on the ground level. The basement was used for storage and the upstairs as a church and meeting hall.

The South Park Hotel, owned by Hardy and Josephine Epperson, also opened in Howbert in 1888; it included a restaurant and an adjoining shop for shoemaking. Howbert had many town services, a railroad depot, a school, a drugstore, a telegraph office, a blacksmith shop, a sawmill, two or three saloons, and originally twenty-five houses. The town also had a cemetery the location of which is unknown.

The 1910 United States Census showed 35 households in Howbert; in the 1930 census, which was the last, there were 107 residents in 31 households. Festivities were important to Howbert. Nearly everyone attended the annual ball. In November 1888, there was an elaborate election party, with a barbecue and a dance, when Benjamin Harrison upset U.S. President Grover Cleveland. The party was the result of a bet; whichever side lost the wager paid for the festivities. Both beef and mutton were served.

Howbert was 40 miles (64 km) from the county seat of Fairplay, where physicians and law-enforcement officers were available. In December 1889, Howbert had eight active cases of typhus fever, or Rocky Mountain spotted fever, spread most frequently by the bite of lice or ticks. In May 1894, the Methodist circuit riding missionary, Father John Lewis Dyer, was injured while in Howbert, but he recovered and lived another seven years. In August 1915, thirty-three passengers were injured on an eastbound Colorado Midland train, which had been on an excursion for the passengers to view and photograph the wildflowers. The trains collided near the town of Idlewild. The views of both engineers had been blocked by the walls of a canyon on the south side of the railroad. The Colorado Midland ceased operation in 1918, and the track was removed by 1921 to make room for a highway.

The water needs of the city and county of Denver were increasing as the area grew. The Eleven Mile Canyon Dam was built from 1930 to 1932. The Howbert public school was relocated just before 1930. In 1933, the completion of the dam caused the South Platte River to flood Howbert, Idlewild, and Freshwater Station, as well as nearby ranches. An extension of the dam in 1957 buried more ranch land. The capacity of the reservoir was brought to nearly 98,000 acre-feet of water. The dam was the largest artificial body of water in Colorado at that time. It is one of seven reservoirs which still contribute to the drinking water of the Denver area.

Though it had been called "the liveliest town in the county for its size", little remains of Howbert today. There is a functioning Howbert Campground in the area. 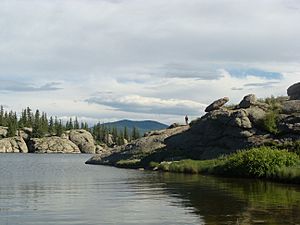 All content from Kiddle encyclopedia articles (including the article images and facts) can be freely used under Attribution-ShareAlike license, unless stated otherwise. Cite this article:
Howbert, Colorado Facts for Kids. Kiddle Encyclopedia.