Hudson is a town in Hillsborough County, New Hampshire, United States. It is located along the Massachusetts state line. The population was 24,467 at the 2010 census, with an estimated population of 24,645 in 2013. It is the ninth-largest municipality (town or city) in the state, by population.

The primary settlement in town, where 7,336 people resided at the 2010 census, is defined as the Hudson census-designated place (CDP) and is located at the junctions of New Hampshire routes 102, 111 and 3A, directly across the Merrimack River from the city of Nashua.

In 1830, after the better part of a century, the name was changed to "Hudson" to avoid confusion with the older town of Nottingham. The name apparently comes from an early belief that the Merrimack River had once been thought to be a tributary of the Hudson River, or that the area had once been explored by Henry Hudson; both proved to be entirely apocryphal stories, but the name of the town remains today.

A prominent family in Hudson history was the Alfred and Virginia Hills family, who owned a large tract of land north of Hudson Village. Dr. Hills' ancestors were original settlers of Hudson. The Hills House on Derry Road (now listed on the National Register of Historic Places) is their original family's vacation home and current location of the Town Historical Society. The grounds host the annual "Old Home Days" fair every year as well as "Harvest Fest" and the "Bronco Belly Bustin' Chili Fiesta", an Alvirne High School Friends of Music fundraiser. Hills Memorial Library (also listed on the National Register) is one of the oldest public lending libraries in the state, and occupies a stone and mortar building on Library Street. Alvirne High School and the Alvirne Chapel, located on family land across Derry Road from the Hills House, were donated to the town. (Alvirne is a contraction of Alfred and Virginia). A strange rumor that The Hills' only son had died during a football game circled for many years, but Dr. and Mrs. Hills only had two daughter who did not survive infancy, so this was a made-up story. Out of respect, Alvirne High went many decades without a football team, despite being one of the largest high schools in the state. It was assumed that such a stipulation had been put as a condition of the high school's charter. When it was learned that no such condition had ever been recorded, financial pressures encouraged the formation of a football team. In fall of 1994, Alvirne High School fielded its first JV football team, with varsity play beginning in 1996. Alvirne High is home to one of the largest agricultural-vocational programs in the area, the Wilbur H. Palmer Agricultural and Vocational School. This school features several student-run businesses including a bank, restaurant, store, day care, dairy farm, and forestry program.

The highest point in Hudson is Bush Hill, at 515 feet (157 m) above sea level, near the town's eastern border. Hudson lies fully within the Merrimack River watershed. 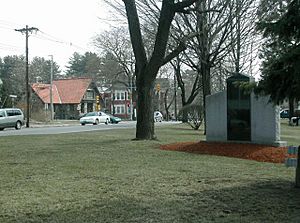 The town of Hudson had two historic centers, though modern development and suburban sprawl have obscured the difference. Hudson Village, roughly equivalent to the Hudson census-designated place, is located on the Merrimack River near the junctions of Routes 3A, 111, and 102, and is home to most of the original schools, libraries, and town government. The Town Hall, the Hills Memorial Library, and the Kimball Webster School (which today houses the superintendent's office) are all located in Hudson Village. The Town Common at the intersection of Derry, Ferry, and Library streets is a park that displays large toy soldiers and other decorations at Christmas time.

Hudson Center, historically Hudson's other town center, is located at the 5-way intersection of Central Street (Route 111), Greeley Street, Kimball Hill Road, and Windham Road. The two most important landmarks of Hudson Center have been lost to history. Benson's Wild Animal Farm, a zoo and amusement park, was closed in the late 1980s due to mounting financial losses. At one time there was a railway that passed through the Center, taking passengers all the way from the Boston area to Benson's. A rail depot stand remained on nearby Greeley Street through the 1970s. The acreage of Benson's Wild Animal Farm was purchased by the town and is now a park for passive recreation. The other landmark, Thompson's Market, closed in 2002 when Mr. Thompson decided to sell his store and retire to Florida. The structure still remains, but it was remodeled and reopened as a 7-Eleven convenience store. The original Thompson's Market is also nearby, a small building on Kimball Hill Road now home to a popular sandwich shop. Greeley Field, a popular park located in Hudson Center, contains a playground, Little League baseball diamond, and basketball courts, where pick-up games still occur frequently. A Revolutionary War-era cemetery and an old school house (now housing) on Kimball Hill Road are located nearby.

There were 8,900 households, out of which 38.5% had children under the age of 18 living with them, 60.0% were headed by married couples living together, 10.1% had a female householder with no husband present, and 24.9% were non-families. 18.9% of all households were made up of individuals, and 6.1% were someone living alone who was 65 years of age or older. The average household size was 2.73, and the average family size was 3.13.

There were 2,924 households, out of which 32.1% had children under the age of 18 living with them, 49.0% were headed by married couples living together, 12.8% had a female householder with no husband present, and 32.7% were non-families. 25.3% of all households were made up of individuals, and 7.8% were someone living alone who was 65 years of age or older. The average household size was 2.51, and the average family size was 3.01.

In addition to the three numbered state highways, about 1/2 of a 2-mile section of the as-yet uncompleted Circumferential Highway also exists in Hudson. The road currently serves to connect Hudson to the Everett Turnpike in Nashua, using the Sagamore Bridge across the Merrimack River.

The nearest airports are Boire Field in Nashua and Manchester–Boston Regional Airport along the border of Londonderry and Manchester. The nearest rail service is the Lowell Line of the MBTA Commuter Rail which can be accessed at the Charles A. Gallagher Transit Terminal in Lowell, Massachusetts. The nearest Amtrak stations are Boston's North Station or South Station. The nearest intercity bus depot is at the Nashua Transit Center in Nashua. Hudson currently has no public transportation in the town; though a street trolley formerly ran through the town connecting it to neighboring communities.

Two small recreational lakes exist within the town borders. Robinson (or Robinson's) Pond in the northern part of the town features a public access beach and boat ramp that can be accessed via Robinson Road. Otternic Pond (locally called "Tonic Pond"), located between Hudson Center and Hudson Village, has a public boat landing (Claveau Landing) that can be accessed off Highland Street. Both ponds are often used for fishing during the summer and skating and ice hockey during the winter. Musquash Pond (or Swamp), located in the southern part of the town, is a wild bird sanctuary and is utilized as a breeding ground by several threatened and endangered species of birds. In the early 1900s hunters would travel by horse from as far as Derry to camp and stalk game in the renowned swamp.

Benson's Wild Animal Farm reopened in May 2010 as Benson Park, a town park for recreational use. There is no admission fee. Work is being done to rehabilitate the park's trails and remaining buildings, including the removal of invasive plant species, and to establish a regular police presence. The Old Lady in the Shoe, the elephant house, gorilla house and other structures are being repaired after decay and vandalism. An official grand opening and re-dedication was held September 2010.

Hills Memorial Library, located in Hudson Village, is one of the oldest public lending libraries in the state, and is listed on the National Register of Historic Places.

A 1/4-mile paved racetrack, the Hudson Speedway, lies near the northern edge of town by the intersection of Old Derry Road and Robinson Road. It can be accessed off Route 102.

All content from Kiddle encyclopedia articles (including the article images and facts) can be freely used under Attribution-ShareAlike license, unless stated otherwise. Cite this article:
Hudson, New Hampshire Facts for Kids. Kiddle Encyclopedia.