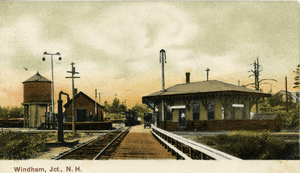 The area was initially home to the Pawtucket Native Americans. Scottish immigrants began to settle in the area in 1719. The region was known as “Nutfield” and included what are now the neighboring towns of Derry and Londonderry. By 1721 some of the original settlers petitioned to form a separate independent community. Governor Benning Wentworth granted this request in 1742. One published theory holds that the community's name refers to Windham, Ireland, harkening back to the petitioners' homeland. However, it has been alternatively postulated that the town was named after Sir Charles Wyndham, 2nd Earl of Egremont, a member of Parliament from 1734 to 1750, Secretary of State for the Southern Department from 1761 to 1763, and a good friend of Governor Wentworth. The town of Windham was originally a parish of Londonderry. Windham was the second town designated by Governor Benning Wentworth following the establishment of the New Hampshire-Massachusetts border. Windham was the birthplace of Samuel Dinsmoor, Governor of New Hampshire from 1831 to 1834. The first census ever taken in Windham totaled at 663 residents in the year 1790.

Historic landmarks in Windham include the Searles School, Searles Castle, the town center, and the Armstrong Memorial Building. Searles Castle is one of Windham’s most prominent landmarks. Edward F. Searles, an interior decorator and antique collector, built the castle. The architect, Henry Vaughn, modeled the castle’s architecture after the style of the Stanton Harcourt Manor in Oxfordshire, England. The building was completed in 1915 at a cost of over $1,250,000. The castle contains over 20 rooms and is available to the public to be rented out for functions and events. In July 1909, Mr. Searles erected a commemorative plaque honoring governor Samuel Dinsmoor "a few rods" from his birthplace on Jenny's Hill, which stands today as a designated historic landmark.

Windham is situated in Rockingham County in southeastern New Hampshire, approximately 3 miles (5 km) north of the Massachusetts border. It is accessible from Exit 3 of Interstate 93. Windham is considered a bedroom community because of its growing population (over 10,000), only about 160 commercial land parcels, and lack of public transportation. The nearest airport to Windham is Manchester-Boston Regional Airport, about 20 miles (32 km) to the north. Boston, Massachusetts, is 37 miles (60 km) to the south along Interstate 93. The landscape of Windham consists of suburban subdivisions, rural open spaces and large areas of undeveloped land.

There were 4,724 households, out of which 35.3% had children under the age of 18 living with them, 71.6% were headed by a married couple living together, 6.0% had a female householder with no husband present, and 20.1% were non-families. 15.7% of all households were made up of individuals, and 7.2% were someone living alone who was 65 years of age or older. The average household size was 2.87, and the average family size was 3.25.

The nearest airport is Manchester–Boston Regional Airport along the border of Londonderry and Manchester. The nearest rail service is the Lowell Line of the MBTA Commuter Rail which can be accessed at the Charles A. Gallagher Transit Terminal in Lowell, Massachusetts. The nearest Amtrak stations are Boston's North Station or South Station.

The Nesmith Library is Windham's public library. Each June Friends of the Library of Windham (FLOW) host Windham’s annual Strawberry Festival. The festival hosts local food businesses around Windham such as The Gourmet Grill, Glenn’s Kreme and Cone, and The Village Bean. Residents of Windham take part in the annual three to five-mile walk known as the Turkey Trot. It takes place every year on Thanksgiving morning through the neighborhoods of Windham and raises money for the local Shepherd's Food Pantry. The Strawberry Festival was moved to Windham High School in 2009 due to the overcrowding at the library in previous years.

The Windham Fire Department is a full-time, 24-hour department. In addition to providing emergency services, the department also works closely with community organizations on fire prevention units in the school district, and CPR and first aid classes. The Windham Police Department is a full-time department staffed by seventeen personnel, including the chief, captain, four sergeants, two detectives, and eight patrol officers. Internal assignments include a Traffic and Community Resource Officer. Resource officers are placed at the Middle School and High School. The department also has on staff a full-time prosecutor, a part-time records clerk and full-time department secretary. Both the fire and police department are located in the center of Windham across from the Windham Town Hall. The nearest hospital is Parkland Medical Center, 5 miles (8.0 km) away in Derry.

All content from Kiddle encyclopedia articles (including the article images and facts) can be freely used under Attribution-ShareAlike license, unless stated otherwise. Cite this article:
Windham, New Hampshire Facts for Kids. Kiddle Encyclopedia.