Pelham was split from Old Dunstable in 1741, when the border between Massachusetts and New Hampshire was settled. It was incorporated in 1746. The town is named after Thomas Pelham-Holles, 1st Duke of Newcastle.

The earliest census data shows the town of Pelham having a population of 543 residents in 1767.

Pelham has no air or rail transport within the town limits. The nearest commercial airport is Manchester–Boston Regional Airport along the border of Londonderry and Manchester. The nearest rail service is the Lowell Line of the MBTA Commuter Rail which can be accessed at the Charles A. Gallagher Transit Terminal in Lowell. The nearest Amtrak station is Haverhill Station in Haverhill, Massachusetts.

The park is located northwest of the center of Pelham at 305 Mammoth Road (NH 128), just north of Nashua Road. The park's land area is surrounded by NH 128, two roads that branch off it, and a minor road which intersects NH 111A.

Muldoon Park offers many short walking trails, four variously sized baseball fields (ranging from t-ball to official), a soccer field, and a play area. Most of the trails lead to the park's two ponds, local roads and houses or to Beaver Brook, a small river. The town of Pelham completed an 18-hole disc golf course here, stretching over a quarter-mile, in September 2007.

The Pelham Parks and Recreation department has recently added two non-official sized baseball fields to the southwest corner of the park. Construction is complete on one field with the exception of dugouts, and the other field is still under construction, as of September 2013.

There is now an 18-hole disc golf course at this park. Many players from surrounding towns enjoy a round of disc golf set in the woods adjacent to the sport fields. 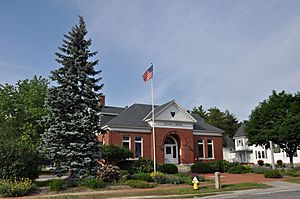 The Pelham Library and Memorial Building, now home to the local historical society

Public schools are managed by the Pelham School District, School Administrative Unit #28, whose boundaries are coterminous with the boundaries of the town. The Superintendent is Chip McGee.

The schools in the district are:

St. Patrick School was at one time a parochial school in the town.

All content from Kiddle encyclopedia articles (including the article images and facts) can be freely used under Attribution-ShareAlike license, unless stated otherwise. Cite this article:
Pelham, New Hampshire Facts for Kids. Kiddle Encyclopedia.