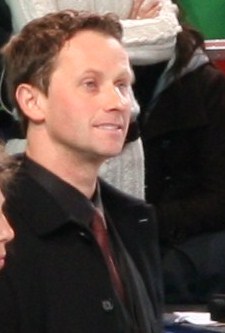 Shpilband was born in Moscow, Soviet Union. He defected to the United States in January 1990 with Veronica Pershina, Gorsha Sur, and Elena Krikanova and went to live with Lucile Begrow in Huntington Woods, Michigan for a few months. Shpilband became a United States citizen in 2000.

He was married to Veronica Pershina. Their daughter Ekaterina Shpilband is also an ice skater.

He won the 1983 World Junior Figure Skating Championships with his partner Tatiana Gladkova. They were coached by Ludmila Pakhomova. Shpilband retired from competitive skating after Ludmila died in 1986.

He worked as a coach at the Detroit Skating Club when he came to the US. He later began coaching in Canton, Michigan.

All content from Kiddle encyclopedia articles (including the article images and facts) can be freely used under Attribution-ShareAlike license, unless stated otherwise. Cite this article:
Igor Shpilband Facts for Kids. Kiddle Encyclopedia.