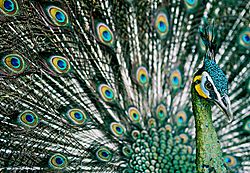 The Asiatic peafowl is a kind of bird. They are the genus Pavo from the Phasianidae family. They originate from Southeast Asia.

The male is called a peacock, the female a peahen.

The males are very colorful, and they have very long train feathers (or tail feathers), which they can move up like a fan. Females are less colorful, and do not have the long train-feathers. Both the male and the female have a little "crown" of feathers on their head. Males show their train feathers to court a female peafowl, or to scare other animals away by making them afraid. 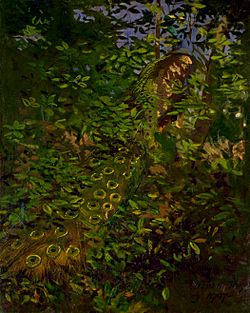 Peacock in the Woods - 1907, painting by Abbott Handerson Thayer. Thayer suggested that the function of the ornate tail was camouflage

All content from Kiddle encyclopedia articles (including the article images and facts) can be freely used under Attribution-ShareAlike license, unless stated otherwise. Cite this article:
Asiatic peafowl Facts for Kids. Kiddle Encyclopedia.