The inshore lizardfish (Synodus foetens) is a member of the family Synodontidae found in the western Atlantic.

The inshore lizardfish is an ambush predator. Its diet consists of various fish and small invertebrates. They include: shrimp, crabs, and cephalopods. 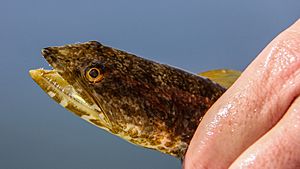 An inshore lizardfish from the Florida Bay.

The habitats for these fish include the bottom in shallow inshore marine waters, usually over sand or mud bottoms, including creeks, rivers, among seagrasses, estuaries, bays, and lagoons. Adults have been found to be also in the open sea above continental shelves.

Fertilization has been observed to be external. They spawn all throughout the year. They do not guard their spherical-shaped eggs because the eggs are scattered in the water; they fall into plants and rocks.

The inshore lizardfish is widely distributed. This fish can be found over soft-bottom inshore areas, especially in the northern Gulf of Mexico described as "in the western Atlantic from New Jersey south along the U.S. coast, Bermuda, the Bahamas, and in the Caribbean from Cuba, Jamaica, Puerto Rico, and St. Martin" (2015).

This species is often captured during shrimp trawls. This occurs in the northern Gulf of Mexico. High mortality occurs from trawl bycatch for this species, but they are usually just discarded after being caught because they have little to no commercial value.

The generic name Synodus is from the Greek syn, meaning grown together, and odus meaning teeth.

All content from Kiddle encyclopedia articles (including the article images and facts) can be freely used under Attribution-ShareAlike license, unless stated otherwise. Cite this article:
Inshore lizardfish Facts for Kids. Kiddle Encyclopedia.