Inverness is an unincorporated community and census-designated place (CDP) located in western Marin County, California. Inverness is located on the southwest shore of Tomales Bay 3.5 miles (5.6 kilometers) northwest of Point Reyes Station, at an elevation of 43 feet (13 meters). In the 2010 census, the population was 1,304. The community is named after Inverness, Scotland and was named by a Scottish landowner.

Inverness is north of San Francisco, on a bay of the Pacific Ocean.

Inverness is located on the west shore of Tomales Bay, which runs southeast along the line of the San Andreas Fault. Surrounded by Point Reyes National Seashore, it is primarily a residential community, with little industry other than tourism. It has a small downtown area with a general store, post office, library, two restaurants, one gift shop and a coffee shop. A third restaurant is located a short way north of downtown. There are also a number of hotels and inns spread throughout the town.

One aspect of the town is a concentration of recreational (and some commercial) boating. There is a small public marina, a few private piers, and the Inverness Yacht Club.

Portions of the John Carpenter film The Fog as well as most of his film Village of the Damned were shot in and around Inverness. 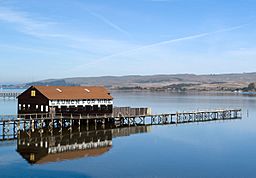 The town is 15 miles or so from Drake's Bay on the Pacific Ocean, named after Sir Francis Drake, who explored the coast in the 16th Century. Although Drake's official log was lost, the ship's doctor's log described landing in an area that reminded him of the White Cliffs of Dover. Drake's Bay is backed by similar-looking cliffs, leading many to believe this is where the ship landed.

The region became the property of James Shafter, who began to develop the property in the 1890s. It became a summer resort where people from San Francisco and Oakland came to camp, hike and swim in Tomales Bay. Many built small summer cabins that still exist today. Small steamboats took day trippers down the bay to secluded beaches. They left from Brock Schreiber's boathouse, which has been preserved and is a prominent local landmark with its prominent sign "Launch for Hire".

In 1995, Inverness Ridge was the site of the Mt. Vision Fire, which burned a large area of Point Reyes National Seashore and a number of homes built on the ridge. The town itself was threatened but was saved by helicopters dipping water from Tomales Bay to drop on the Bishop pine forest between the town and the burning ridgetop. 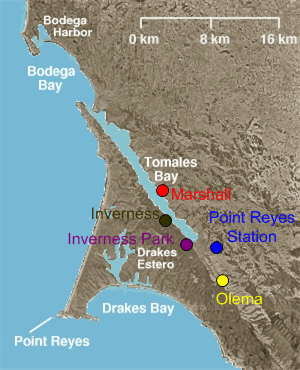 The town is adjacent to the San Andreas Fault.

Other nearby towns include Point Reyes Station, Inverness Park, Olema, and Marshall.

This region experiences warm (but not hot) and dry summers, with no average monthly temperatures above 71.6 °F. According to the Köppen Climate Classification system, Inverness has a warm-summer Mediterranean climate, abbreviated "Csb" on climate maps. However the site experiences an extremely narrow range of temperatures, with July being only 4°F warmer than January (54°F versus 50°F). The warmest month is actually September, a pattern common in the San Francisco bay area due to the annual rollover in ocean currents. However note that the nearest NOAA-reporting weather station to Inverness is actually about 10 miles from downtown, at the Point Reyes Lighthouse, in an area with much more sea breeze exposure.

The census reported that 100% of the population lived in households.

All content from Kiddle encyclopedia articles (including the article images and facts) can be freely used under Attribution-ShareAlike license, unless stated otherwise. Cite this article:
Inverness, California Facts for Kids. Kiddle Encyclopedia.