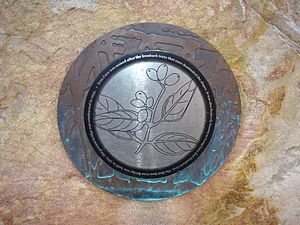 Iron Cove is a bay on the Parramatta River, in the inner-west of Sydney, in the state of New South Wales, Australia. It is approximately 5 kilometres (3.1 mi) due west of Sydney's central business district. It is surrounded by the suburbs of Birchgrove, Balmain, Rozelle, Lilyfield, Haberfield, Five Dock, Rodd Point, Russell Lea and Drummoyne. The bay extends from Longnose Point to the south-west.

In the early days of the colony of New South Wales, the area was sometimes known as Long Cove, presumably for its long narrow shape. The origin of the name 'Iron Cove' is unclear. In his book on Sydney Harbour, P.R. Stephensen suggests that the name is derived from the iron shackles worn by convicts from Cockatoo Island who were forced to work in the area around the bay from 1839. However, he goes on to note that this is merely "a surmise". Another possible explanation for the name is that it was derived from the Ironbark trees that used to grow there.

The island in the middle of the bay is called Rodd Island, in honour of Brent Clements Rodd. Iron Cove is crossed by the Iron Cove Bridge, which was first opened in 1882 and links Rozelle and Balmain to Drummoyne. The original bridge was replaced in the 1950s. The Australian warships HMAS Ballarat and HMAS Goulburn' were broken up for scrap in the bay in 1953.

The land around the bay is mostly made up of publicly accessible foreshore or parkland. This forms a 7 kilometres (4.3 mi) jogging circuit known as The Bay Run.

All content from Kiddle encyclopedia articles (including the article images and facts) can be freely used under Attribution-ShareAlike license, unless stated otherwise. Cite this article:
Iron Cove Facts for Kids. Kiddle Encyclopedia.