Clinton Township, which included what is now Irvington, Maplewood and parts of Newark and South Orange, was created on April 14, 1834. The area was known as Camptown until the mid-1800s. In 1850, after Stephen Foster published his ballad, Camptown Races, residents were concerned that the activities described in the song would be associated with their community. The town was renamed, Irvingtown, in honor of Washington Irving.

Irvington was incorporated as an independent village on March 27, 1874, from portions of Clinton Township. What remained of Clinton Township was absorbed into Newark on March 5, 1902. On March 2, 1898, Irvington was incorporated as a Town, replacing Irvington Village. In 1982, the town was one of four Essex County municipalities to pass a referendum to become a township, joining 11 municipalities that had already made the change, of what would ultimately be more than a dozen Essex County municipalities to reclassify themselves as townships in order take advantage of federal revenue sharing policies that allocated townships a greater share of government aid to municipalities on a per capita basis.

The 1967 Newark riots hastened an exodus of families from that city, many of them moving a few short blocks into neighboring Irvington. Until 1965, Irvington was almost exclusively white. By 1980, the town was nearly 40% black; by 1990 it was 70%. On July 1, 1980, Fred Bost, the first black to serve on the Town Council, was sworn in as East Ward Councilman. Michael G. Steele, the town's first black mayor, was elected in 1990, followed by Sarah Brockington Bost in 1994. The current Mayor is Tony Vauss.

Irvington was home to Olympic Park, an amusement park, from 1887 to 1965. The park property straddled the border of Irvington and Maplewood with the main entrance on Chancellor Avenue and a side entrance on 40th St. After the park closed, the merry-go-round was sold and transported to Disney World, in Orlando, FL. The book, "Smile: A Picture History of Olympic Park, 1887 - 1965" written by Alan A. Siegel was published in 1983 by Rutgers University Press.

Unincorporated communities, localities and place names located partially or completely within the township include Irving Place.

The township is bordered by Maplewood to the west, Newark to the east, Hillside to the south, South Orange to the northwest, all in Essex County; and by Union to the southwest in Union County, New Jersey.

Local roads include County Road 509 and Route 124. Major highways include Interstate 78 which passes through very briefly along the southeastern border at Exit 54. The Garden State Parkway also runs through the center and is accessible from Exit 143 and Exit 144. 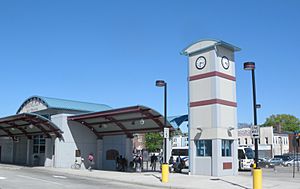 All content from Kiddle encyclopedia articles (including the article images and facts) can be freely used under Attribution-ShareAlike license, unless stated otherwise. Cite this article:
Irvington, New Jersey Facts for Kids. Kiddle Encyclopedia.