Hillside was incorporated as a township on April 3, 1913, from portions of Union Township, based on the results of a referendum held on April 29, 1913. The township was named for the surrounding hills.

Hillside was created from parcels of land carved out of neighboring Newark, Elizabeth, and Union. It originally contained the farms of Woodruff, Conant and Saybrook. Local streets still bear their names.

Hillside was incorporated shortly after the appearance of Halley's Comet in 1910, and for that reason, the team nickname of Hillside High School is the "Comets." Several local businesses take the name "Comet" for the same reason.

The Hillside Historical Society was established in the 1980s in the Woodruff home on Conant Street, perhaps the township's oldest. The Woodruff House and Eaton Store Museum is operated and maintained by the Hillside Historical Society. Purchased by the Society in 1978, the house has been faithfully restored to its original grandeur. The Woodruff House spans three centuries in one structure, including the original 1735 building, the 1790 addition, the 1890s kitchen and the 1900s store. The society has also added to the grounds an authentic post and beam barn, a Phil Rizzuto and All Sports Museum honoring the Hillside legend as well as an archive to house the many documents the society has obtained over the years.

Jean-Ray Turner, a reporter for the Elizabeth Daily Journal, wrote Along the Upper Road in the 1970s, a book of the history of Hillside.

Hillside has been the home of Bristol-Myers Squibb. Lionel Trains were manufactured from 1929 to 1974 at a factory located in Hillside that employed as many as 2,000 employees. The town thrived for decades and reached an economic peak in the 1960s. Blue collar workers who lived primarily in the central part of town were employed in local manufacturing concerns. White collar workers established the neighborhood known as Westminster where Yankee shortstop and broadcaster Phil Rizzuto lived for most of his adult life, until his death. That section of town also included the private Pingry School for boys (which left the township) and is now the East Campus of Kean University.

In the 1950s and 1960s the township was approximately one-half Jewish, many of whom lived either in Westminster or in the area of Hillside near Chancellor Avenue, adjacent to the Weequahic section of Newark, which was the early home of comedian Jerry Lewis and writer Philip Roth (Portnoy's Complaint).

In the early 1950s the township established Conant Park, its largest. The park is bounded by the Elizabeth River and Conant Street. At the rear area of the park near Pingry School was the boundary of the Kean Estate, the boyhood home of Governor Thomas Kean (1982–1990). The wealthy Kean family also donated the land on Morris Avenue and helped to establish Newark Normal College in 1885, which was renamed Kean College, and later Kean University, in the family's honor. Also in the 1950s the Town Hall, Police Headquarters and Municipal Library were constructed at the corner of Liberty and Hillside Avenues.

Township organizations include Rotary International, Kiwanis, Knights of Columbus, Elks, the Hillside Industrial Association, the Hillside Business and Professional Women's Club, the Republican Club and the Democratic Club, as well as a number of ethnic clubs and associations.

In 1991, police from both Hillside and Newark fired nearly 40 shots at a van that had rammed a Hillside police vehicle after a high-speed chase. The pursuit had started after the van had been reported stolen at gunpoint in Newark and was being followed by three Newark police cars before crossing into Hillside. Two of the people inside the vehicle were killed and four of the five other passengers were wounded, though the Union County Prosecutor indicated that there was no clear explanation for why the police had started shooting. The Reverend Al Sharpton held a rally outside Town Hall on Hillside Avenue demanding that the police officers involved in the shootings should be prosecuted for their actions.

Unincorporated communities, localities and place names located partially or completely within the township include Lyons Farms and Saybrooke.

The township is located on the northern edge of Union County and is bordered to the northwest by Irvington and to the north and northeast by Newark, both in Essex County. Elizabeth borders Hillside to the east and southeast, while Union borders to the west.

The climate in this area is characterized by hot, humid summers and generally mild to cool winters. According to the Köppen Climate Classification system, Hillside has a humid subtropical climate, abbreviated "Cfa" on climate maps.

There were 7,112 households out of which 33.2% had children under the age of 18 living with them, 48.7% were married couples living together, 22.0% had a female householder with no husband present, and 22.2% were non-families. 18.6% of all households were made up of individuals, and 6.6% had someone living alone who was 65 years of age or older. The average household size was 3.01 and the average family size was 3.41. 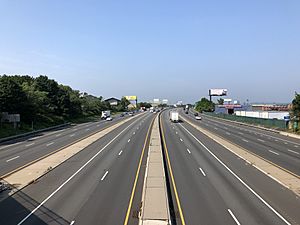 I-78 westbound in Hillside

NJ Transit offers bus service to the Port Authority Bus Terminal in Midtown Manhattan on the 114 route and to other New Jersey points. There is one train line that passes through the township but there are no stations. The Irvington Industrial Branch of the Lehigh Valley Railroad (now Conrail Shared Assets) breaks off of the mainline to serve several industries. The closest train stations are Union station in Union, and North Elizabeth station in Elizabeth.

Portions of the township are part of an Urban Enterprise Zone (UEZ), one of 32 zones covering 37 municipalities statewide. Hillside was selected in 1996 as one of a group of seven zones added to participate in the program. In addition to other benefits to encourage employment and investment within the UEZ, shoppers can take advantage of a reduced 3.3125% sales tax rate (half of the 6+5⁄8% rate charged statewide) at eligible merchants. Established in May 1996, the township's Urban Enterprise Zone status expires in May 2027.

The Hillside Public Schools serve students in pre-kindergarten through twelfth grade. As of the 2018–19 school year, the district, comprised of six schools, had an enrollment of 3,123 students and 260.7 classroom teachers (on an FTE basis), for a student–teacher ratio of 12.0:1. Schools in the district (with 2018–19 enrollment data from the National Center for Education Statistics) are Abram P. Morris Early Childhood Center (636 students; in grades PreK-1), Calvin Coolidge Elementary School (205; grade 2), Hurden Looker School (461; 3–4), George Washington School (488; grade 5), Walter O. Krumbiegel Middle School (452; 6–8) and Hillside High School (842; 9–12). Hillside High School on Liberty Avenue was originally constructed in 1941, replacing the Coe Avenue (A.P. Morris) School which became a grammar school. Additions were later added to accommodate the baby-boomers of the 1950s and 1960s. In the mid-sixties the high school held some 1,500 students.

Catholic grammar schools included Christ the King on Columbia Avenue and St. Catherine of Siena School in Elizabeth on North Broad Street until the two were merged in 2004 to form Hillside Catholic Academy with the students from both schools together at the facility on Bloy Street. The school was one of eight closed by the Roman Catholic Archdiocese of Newark at the end of the 2011–12 school year, in the face of declining enrollment and rising expenses, part of a long-term reduction in the number of schools in the archdiocese, which had dropped to 112 from the 176 schools systemwide a decade earlier.

A portion of Kean University is located in the Westminster section of Hillside, on the grounds of the former Pingry School.

People who were born in, residents of, or otherwise closely associated with Hillside include:

All content from Kiddle encyclopedia articles (including the article images and facts) can be freely used under Attribution-ShareAlike license, unless stated otherwise. Cite this article:
Hillside, New Jersey Facts for Kids. Kiddle Encyclopedia.