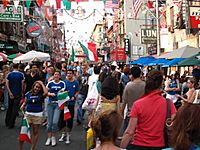 Italophilia is very strong in the USA, mainly between the Italian Americans, as can be seen even for the 2006 WorldCup celebrations of the Italian soccer team victory

Italophilia is the admiration, general appreciation or love of Italy, its culture, society, arts and people. It is often related to the emulation of Italy's ideals and civilization.

The term is used in two basic contexts: in international politics and in cultural context.

"Italophilia", "Italophile", and "Italophilic" are the terms used to denote pro-Italian sentiments, usually in politics and literature.

A huge italophilia started to develop in Europe during the centuries of the Italian Renaissance.

Actually one of the main reasons of Italophilia in the world is that Italy is home to more World Heritage Sites than any other nation in the world. These sites are culturally important and value according to UNESCO. Indeed about 60% of the works of art of the world are in Italy.

Another reason is the worlwide appreciation for Italian culinary and foods. Italy is also a big wine producer. In 2005 it made over 5 million tonnes, and many italian wines are very famous in the world, like the "Chianti".

Indeed in the American countries with a huge Italian emigration in the last centuries, there it is a widespread italophilia: Argentina, Brasil, Uruguay, Canada and the USA have millions of Italian descendants who promote in their society the love and appreciation for Italy.

Actually Giorgio Silvestri (director of the "Assemblea legislativa della Liguria") has calculated that there are nearly 250 million italophiles in the world.

Italian symbols, appreciated all around the world

All content from Kiddle encyclopedia articles (including the article images and facts) can be freely used under Attribution-ShareAlike license, unless stated otherwise. Cite this article:
Italophilia Facts for Kids. Kiddle Encyclopedia.