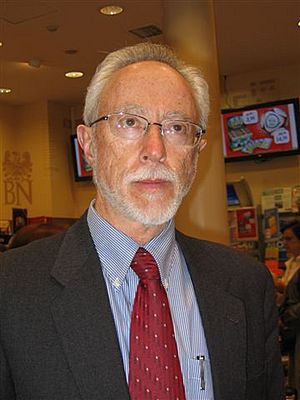 John Maxwell Coetzee (born 9 February 1940) is a South African-Australian novelist, essayist, linguist, literacy critic, activist and translator. He won the 2003 Nobel Prize in Literature. He has won the Booker Prize twice for The Life and Times of Michael K (1983) and Disgrace (1999). He writes his works in English, Afrikaans and Dutch. He moved to Australia in 2002 and became a citizen in 2006.

Coetzee was born in Cape Town to Afrikaner parents. He studied at the University of Texas at Austin and the University of Cape Town. He lives in Adelaide, South Australia with his partner Dorothy Driver. He was married to Philippa Jubber from 1963 to 1980. They had two children, son Nicholas (died 1989) and daughter Gisela.

All content from Kiddle encyclopedia articles (including the article images and facts) can be freely used under Attribution-ShareAlike license, unless stated otherwise. Cite this article:
J. M. Coetzee Facts for Kids. Kiddle Encyclopedia.