Jack Vettriano grew up in the industrial seaside town of Methil, Fife. He was raised in poverty, and lived with his mother, father and older brother in a spartan miner’s cottage, sharing a bed with his brother and wearing hand-me-down clothes. From the age of 10, his father sent him out to earn money. His father took half his earnings. Vettriano left school at 16.

Much of his art education came from studying paintings at the Kirkcaldy Museum and Art Gallery.

Vettriano is a self-taught artist in drawing and perspective who manipulates paint in veiled glazes and meaningful shadows. Vettriano's style has been compared to those of Hopper and Sickert, and his scudded beaches to those of Boudin. In many of his paintings, there is a hidden narrative, in enigmatic compositions, a starting point for dozens of short stories.

It is fair to say that Vettriano is controversial. Professional art critics do not seem to like his work, but the public does. He is one of at least three modern British artists to make a great deal of money from his works.

In 1989 Vettriano had two canvases in the Royal Scottish Academy annual show. Both paintings sold on the first day and Vettriano was approached by several galleries. Further exhibitions followed in Edinburgh, London, Hong Kong and Johannesburg. In November 1999, Vettriano’s work was shown for the first time in New York City, when 21 paintings were displayed at The International 20th Century Arts Fair at The Armory. More than 40 collectors from the UK flew out for the event and 20 paintings were sold on the opening night.

In March 2010, Days Of Wine And Roses was opened by Scottish First Minister Alex Salmond at the Kirkcaldy Museum. The exhibition then transferred to Vettriano's gallery in London. 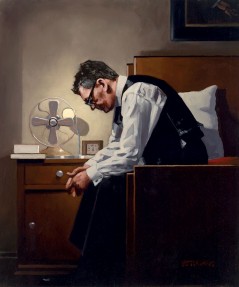 In February 2011, it was announced that Vettriano's self-portrait The Weight would be displayed at the re-opened Scottish National Portrait Gallery from November 2011, the first time he had exhibited at a national gallery. Deputy director Nicola Kalinsky said Vettriano was "a figure we have wanted on our wall for a while for obvious reasons". First Minister, Alex Salmond said of Vettriano, "He is a wonderful artist of considerable talent and achievement and this is a magnificent tribute to the special place he holds in the hearts of people in Scotland."

In September 2013, a major retrospective of Vettriano's work opened at Glasgow's Kelvingrove Art Gallery and Museum. 'Jack Vettriano: A Retrospective' ran until 23 February 2014 and featured over 100 works.

All content from Kiddle encyclopedia articles (including the article images and facts) can be freely used under Attribution-ShareAlike license, unless stated otherwise. Cite this article:
Jack Vettriano Facts for Kids. Kiddle Encyclopedia.