In late January 2016, a cold wave struck much of East Asia, parts of mainland Southeast Asia and parts of northern South Asia, bringing record cold temperatures and snowfall to many regions. Sleet was reported in Okinawa for the first time on record, and many other regions saw their coldest temperatures in decades. Snowfall and frigid weather stranded thousands of people across four countries.

At least 85 people in Taiwan died from hypothermia and cardiac arrest following a sudden drop in temperature during the weekend of January 22–24. The cold claimed a further fourteen lives in Thailand, and snowstorms resulted in six deaths across Japan. This event was driven by a fast Arctic warming, forcing the Arctic Oscillation to change phase rapidly from positive (in late December) to negative (in late January). 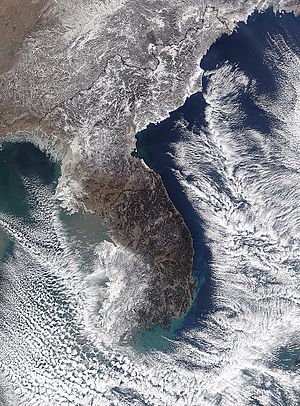 On 24 January, the temperature at the Hong Kong Observatory fell to the coldest in 59 years. Hundreds of people hiked up Tai Mo Shan for sightseeing, where temperatures fell to a record low. Many were also on Tai Mo Shan participating in a 100 km marathon. 129 required rescue and 67 were hospitalised for signs of hypothermia.

Classes were cancelled for more than 510,000 students of kindergartens, primary schools, and the English Schools Foundation on 25 January and it is believed to have been the first time the Education Bureau has ever cancelled classes due to cold weather. The vice chairman of the Aided Primary School Heads' Association stated that the decision was justified as slippery roads could endanger school buses, which in Hong Kong are not fitted with winter tyres.

Snowstorms across Japan killed six people and injured 100 others. More than 600 flights were disrupted across the nation. Okinawa observed sleet for the first time since reliable records began. Amami Ōshima saw snow for the first time in 115 years. Record snowfall blanketed portions of the mainland. Temperatures in Tokyo fell to the lowest recorded since 1984. Temperatures fell to record lows across much of western Japan. 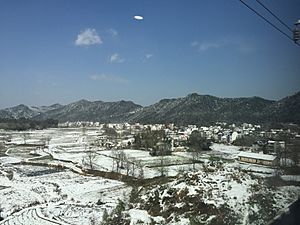 Snow and sleet were reported in parts of Guangzhou, the first time these had been observed since 1967 and 1956 respectively. Snow also fell on Shenzhen, a rare occurrence for the region. At least four people died of carbon monoxide poisoning from a heating system in Guangzhou. Farther north, the minimum temperature in Shanghai fell with light snow falling on the morning of 23 January. Twenty-four weather stations observed all-time record lows. Temperatures across Inner Mongolia fell to a record low.

Snow and cold weather forced the cancellation of 1,200 flights on Jejudo, off the southwestern tip of the Korean Peninsula, stranding approximately 90,300 passengers. Ulleungdo was blanketed with snow. Temperatures in Seoul fell to the lowest in 15 years. Many all-time low temperature records were broken in cities across the south of the country. In North Korea 40,000 construction workers were reportedly withdrawn from construction sites. 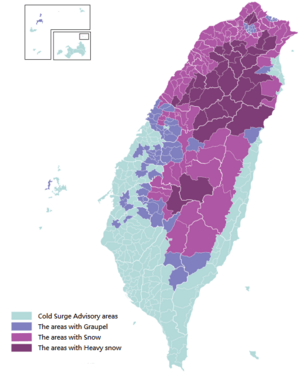 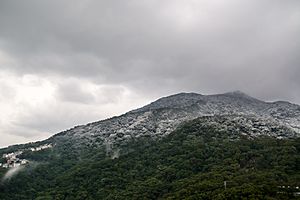 A 500-meter snowfall line on Datun Mountain in Yangmingshan, Taipei

A surge of cold air during the weekend of January 22–24 brought temperatures as low as 4 °C (39 °F) to Taipei, the lowest temperatures in 44 years. Due to the subtropical climate, many homes do not have central heating or insulation, and residents struggled to cope with the temperatures. Overall, at least 85 people died from hypothermia and cardiac arrest in Taiwan, including 66 people in Taipei and Taoyuan, and another 16 in Kaohsiung. The majority of victims died in their homes.

When temperatures in Bangkok, Thailand fell, 14 people across Thailand died, many of whom were reportedly suffering from chronic or respiratory diseases. In Hanoi, Vietnam, the lowest temperature recorded was the coldest temperature measured in the city in over 20 years. Snow fell across the mountains of Lào Cai Province in Northern Vietnam.

In Laos, temperatures in Houaphanh Province dropped and some upland areas experienced frost, causing the death of several buffaloes in Xam Neua District. In the northern islands of the Philippines temperatures dropped to 9 °C (48 °F) the coldest recorded temperature in 2016.

In northern India, temperatures dropped to −16.6 °C (2.1 °F) in some areas, and below 5 °C (41 °F) in New Delhi. Fog resulting from the low temperatures led to delays at Indira Gandhi International Airport and forced cancellations of train services in New Delhi.

In Nepal, 700 schools were shut in Rautahat and Parsa owing to thick fog and the cold, and the number of patients suffering from cold-related diseases increased in medical facilities throughout the country.

All content from Kiddle encyclopedia articles (including the article images and facts) can be freely used under Attribution-ShareAlike license, unless stated otherwise. Cite this article:
January 2016 East Asia cold wave Facts for Kids. Kiddle Encyclopedia.