Joseph Jason Namakaeha Momoa (born August 1, 1979) is a Kānaka-American actor, model, and producer. He is known for his television roles as Ronon Dex on the military science fiction television series Stargate Atlantis (2004–2009), Khal Drogo in the HBO fantasy television series Game of Thrones (2011–2012), and as Declan Harp in the Netflix series Frontier (2016–present).

Momoa portrayed the title character in the sword and sorcery film Conan the Barbarian (2011). He plays Aquaman in the DC Extended Universe, beginning with the 2016 superhero film Batman v Superman: Dawn of Justice, and then in the 2017 ensemble Justice League and the 2018 solo film Aquaman.

Road to Paloma was Momoa's first film as director, writer, and producer. He also starred in the lead role in the film, released on July 11, 2014. 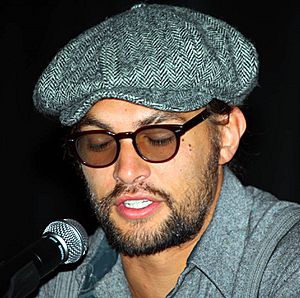 An only child, Momoa was born in 1979 in Honolulu, Hawaii and was raised in Norwalk, Iowa. After high school, Momoa began college in Iowa as a marine biology major, studying for a period in the Florida Keys. He transferred his major to wildlife biology at Colorado State University. Before completing his degree, he moved back to the Hawaiian Islands. As a young man, Momoa traveled extensively, took up pastel painting in Paris, and studied Buddhist teachings in Tibet. 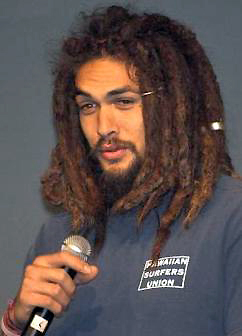 Momoa with the dreadlocks for filming of Stargate Atlantis

In 1998, Momoa was discovered by international designer Takeo Kobayashi, who encouraged his modeling career. Momoa won Hawaii's Model of the Year 1999. At 19 years old, he also worked part-time in a surf shop before being cast in the action drama series Baywatch Hawaii, where he appeared as Jason Ioane (1999–2001).

In addition to his appearances in North Shore, Johnson Family Vacation, and Stargate: Atlantis, Momoa was cast as Roman in four episodes of the comedy-drama television series The Game (2009). He portrayed the title protagonist in Conan the Barbarian (2011), a reimagining of the 1982 film of the same name and a role made famous by Arnold Schwarzenegger. Momoa gained his role of Khal Drogo on HBO's Game Of Thrones through his audition, in which he performed the Haka, an intimidating Māori war dance traditionally used on the battlefield. 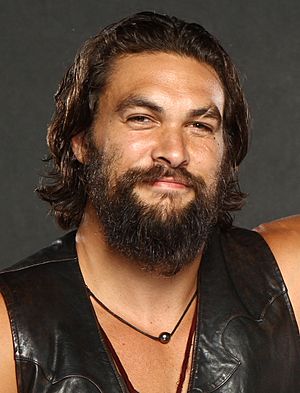 Momoa at the 2014 Florida Supercon

Momoa began a relationship with actress Lisa Bonet after mutual friends introduced them in 2005. Momoa and Bonet married in October 2017. They have 2 children. Through his marriage to Bonet, Momoa became the stepfather to Zoë Kravitz.

In December 2017, Momoa was featured in the Men's Health magazine on the cover and with an article detailing his fitness routine for Aquaman. Momoa learned martial arts for his role as Ronon in Stargate Atlantis and for Conan. In 2017, Momoa started practicing Brazilian jiu-jitsu.

On November 15, 2008, Momoa was slashed in the face with a broken beer glass by a man at the Bird Cafe, a tavern in Hollywood, California. He received approximately 140 stitches during reconstructive surgery and the scar is apparent in his later work.

All content from Kiddle encyclopedia articles (including the article images and facts) can be freely used under Attribution-ShareAlike license, unless stated otherwise. Cite this article:
Jason Momoa Facts for Kids. Kiddle Encyclopedia.