Jenk Oz (born 23 April 2005) is a British entrepreneur who is the Founder of Thred Media, a global publishing, consulting and production company focused on social change, aimed at Generation Z.

At 12 years old, he became one of the youngest CEOs in the UK.

Jenk Oz was born in London, England, the son of a Turkish father, Cenk Oguz and a Canadian mother, Carmen Greco. Jenk's father is an orthopaedic surgeon at the NHS and his mother was a Managing Director at Goldman Sachs before Co-Founding both a Biotech company, Haoma Medica Ltd. and a Medical Device company, Aventum Devices Ltd. His mother currently serves as the Chief Financial Officer for Thred Media Jenk is an only child, and was raised in London where he attended Strawberry Fields Nursery School, Garden House School, Summer Fields School, Oxford and Eton College, Windsor.

Oz first expressed an interest in becoming an entrepreneur at the age of just eight years old, when he presented the original idea for iCoolKid Ltd. at a ‘Show and Tell’ presentation held during assembly. From here the concept of iCoolKid was born – a digital platform aimed at Generation Z.

In March 2019, Oz was interviewed by business publication Forbes on how businesses can market to Gen Z, and commented on how businesses can use each social channel differently: "To reach Gen Z, it's important for retailers to pay attention to their social presence, and consider how to build each channel. Each platform appeals to different followers and will attract different age groups, so perfecting the right tone is imperative."

Late 2019, Oz decided to rename the company to Thred Media and reposition the content upwards to the teen and young adult demographic. Additionally, he restructured the business to focus exclusively on social change content and build out a consulting and insights division alongside publishing. July 2020, Thred the social change focused website was launched globally. 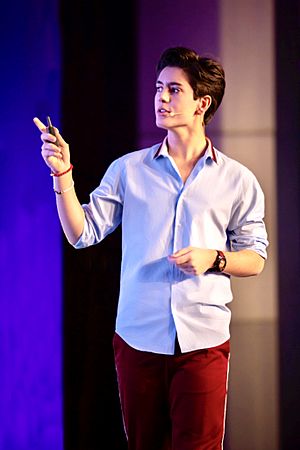 Jenk Oz, at the SME Beyond Borders Conference Dubai 2019

Oz has been involved in several speaking engagements. In July 2017, he spoke at the TEDx Youth event in Harlow, Essex. The talk was entitled Ideas Ink, and referred to writing ideas down on paper and treating ideas like a company from day 1.

In November 2017, he spoke to a crowd of over 2000 people at Brand Week Istanbul and encouraged them to support young entrepreneurship in schools by providing a place, people, time and support for after school clubs that focused on idea development. Later that month (Nov 2017), Jenk was the closing speaker at the Oxford Global: Model United Nations Conference at Oxford University and returned again in November 2018 as the assistant to the MUN Secretary General.

In May 2018, he spoke at the Amazon AWS Summit London where he encouraged youth to use Influencers and Champions from around the world in the absence of a local support system for idea development. He also spoke at KidTECH 2018, an industry event focused on strategies relating to the build, rollout, scaling and marketing of businesses aimed at Generation Z.

In September 2018, Oz spoke at Retail Week's annual Tech festival. Jenk sat on a panel of ‘the next generation of tech leaders’ discussing how their business ideas grew from conception to reality, and what today's businesses must do to stay competitive in the retail space. Jenk's passion for inspiring other young people to pursue entrepreneurship was evident in his role at the 2018 Kidzania Kidpreneur festival.

In September 2018, Oz spoke as part of a select group of young entrepreneurs offering expert top tips and advice on how to start a business at a young age. Also in September 2018, Jenk spoke at both the Maximum Achievement 2.0 conference and the Oppidum Education Conference about using social media in a positive and productive way for both business and personal use. Jenk took part in his second TEDx event in November 2018 – this time as Host/Speaker for the TEDx King's College London club event, focusing on ‘breaking the pattern’

In February 2019, Oz spoke at Student Enterprise Conference championing the year's theme of ‘Empowering the next generation of changemakers’. The event was hosted by NACUE, a not for profit organisation supporting the development of enterprise and entrepreneurship at colleges and universities across the UK and Europe.

In March 2019, Oz spoke at the annual SME Beyond Borders Dubai talking about the most interesting and impactful trends and technologies that will influence the future of business 10 years from now.

In addition to his work at Thred Media., Oz has trained at The Juilliard School, Sylvia Young Theatre School, National Youth Musical Theatre, Young Actor's Theatre and the Royal Academy of Dance as an actor, musician, singer, dancer, model and presenter. His professional work to date has included many commercials, modeling contracts and West End appearances in the likes of ‘The Last of De Mullin’ and ‘Taming of the Shrew’ as well as appearing in Sky Atlantic's TV show ‘Fortitude’ .

Since September 2017, Jenk has been a member of the Marketing Advisory Board for Founders4Schools & Workfinder App. He also supports the annual Jeans4Genes campaign for Genetic Disorders UK as one of their 2017 ambassadors.

Recently he has become an ambassador for Prospect 100, Big Youth Group and Big Life Project. All the projects are dedicated to improving the odds of young people once they leave school.

All content from Kiddle encyclopedia articles (including the article images and facts) can be freely used under Attribution-ShareAlike license, unless stated otherwise. Cite this article:
Jenk Oz Facts for Kids. Kiddle Encyclopedia.