In 1999, Carmack appeared as number 10 in TIME's list of the 50 most influential people in technology. In March of 2006, Carmack was added to the Walk of Game, an event that names the most important people in video games.

He is best known for his innovations in 3D graphics, such as his Carmack's Reverse algorithm for shadow volumes. In August 2013, Carmack took the position of CTO at Oculus VR. 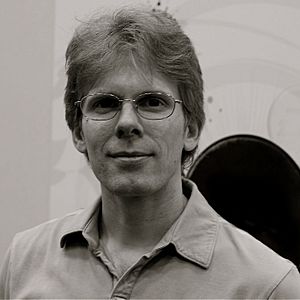 Carmack was introduced to video games with the 1978 shoot 'em up title Space Invaders in the arcades during a summer vacation as a child. The 1980 maze chase arcade game Pac-Man also left a strong impression on him. He cited Shigeru Miyamoto as the game developer he most admired.

He attended the University of Missouri–Kansas City for two semesters before withdrawing to work as a freelance programmer. 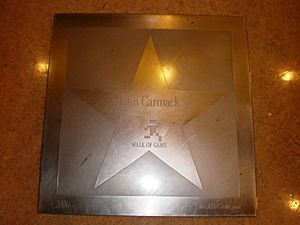 The star for John Carmack at the Walk of Game in the Metreon in San Francisco, California

Carmack was so successful at id that by mid-1994 he had purchased two Ferrari Testarossas. He met his wife Katherine Anna Kang at the 1997 QuakeCon. Carmack and Kang married on January 1, 2000. They had a son in 2004.

As a game developer, he differs from many of his contemporaries by avoiding commitment to a final release date for any game he is developing. Instead, when asked for a release date on a new title, Carmack will usually reply that the game will be released "when it's done."

He loves pizza. During his time at id Software, a medium pepperoni pizza would arrive for Carmack from Domino's Pizza almost every day, carried by the same delivery person for more than 15 years. Carmack had been such a regular customer that they still charge him 1995 prices.

Titles are listed below in reverse chronological order.

All content from Kiddle encyclopedia articles (including the article images and facts) can be freely used under Attribution-ShareAlike license, unless stated otherwise. Cite this article:
John Carmack Facts for Kids. Kiddle Encyclopedia.