John Carradine (born Richmond Reed Carradine; February 5, 1906 – November 27, 1988) was an American actor, best known for his roles in horror films, Westerns, and Shakespearean theatre. A member of Cecil B. DeMille's stock company and later John Ford's company, he was one of the most prolific character actors in Hollywood history. He was married four times, had five children, and was the patriarch of the Carradine family, including four of his sons and four of his grandchildren who are or were also actors. 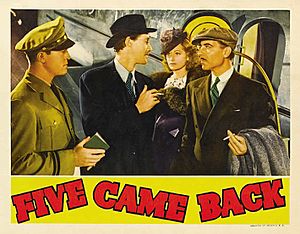 Retired, Carradine suffered from painful and crippling rheumatoid arthritis, before he died from multiple organ failure at Fatebenefratelli Hospital in Milan, Italy, on November 27, 1988. Hours before he was stricken, he had climbed the 328 steep steps of Milan's Gothic cathedral, the Duomo.

There was a Requiem Mass for John Carradine at St. Thomas the Apostle Episcopal Church in Hollywood. Jane Fonda was among those in attendance. An Irish wake followed, and his body was later buried at sea between the California coast and Catalina Island. 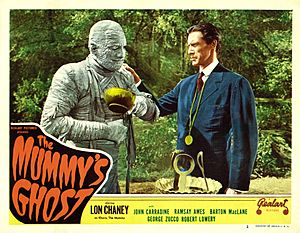 Four of Carradine's five sons became actors: David, Robert, Keith, and Bruce. David had a prolific career, amassing 227 movie and television credits by the time of his death in 2009. He also had a brief Broadway career and produced and directed a number of independent projects. His success often led to work for other members of his family, including his father. The two appeared together in a few films. John's son Christopher is an architect and vice president of Walt Disney Imagineering.

The following are only a few examples of the many roles John Carradine performed on television between 1947 and 1986:

All content from Kiddle encyclopedia articles (including the article images and facts) can be freely used under Attribution-ShareAlike license, unless stated otherwise. Cite this article:
John Carradine Facts for Kids. Kiddle Encyclopedia.