John Dramani Mahama (born 29 November 1958) is a Ghanaian politician who served as President of Ghana from 24 July 2012 to 7 January 2017. He previously served as Vice President of Ghana from 2009 to 2012, and took office as President on 24 July 2012 following the death of his predecessor, John Atta Mills. A communication expert, historian, and writer, Mahama was a Member of Parliament from 1997 to 2009 and Minister of Communications from 1998 to 2001. He is a member of the National Democratic Congress.

Mahama is the first vice president to have ascended to the presidency due to the death of his predecessor, John Atta Mills. He was elected to serve a full term as President in the December 2012 election. He ran for re-election to a second full term in the 2016 election, but was defeated in the first round by New Patriotic Party candidate Nana Akufo-Addo, whom he had defeated four years prior. This makes him the first president in the history of Ghana to not have won a second term.

A member of the Gonja ethnic group, he hails from Bole in the Northern region. Mahama was born in Damongo in the Damango-Daboya constituency of Northern region into a political tradition dating back to the country's First Republic. His father, Emmanuel Adama Mahama, a wealthy rice farmer and teacher, was the first Member of Parliament for the West Gonja constituency and the first Regional Commissioner of the Northern Region during the First Republic under Ghana's first president, Kwame Nkrumah. Mahama's father also served as a senior presidential advisor during Ghana's Third Republic under Hilla Limann.

Mahama had his early education at Achimota School and his secondary education at Ghana Secondary School (Tamale, Northern region).He proceeded to the University of Ghana, Legon, receiving a bachelor's degree in history in 1981 and a postgraduate diploma in communication studies in 1986. As a student, he was a member of Commonwealth Hall (Legon). He also studied at the Institute of Social Sciences in Moscow in the Soviet Union, specializing in social psychology; he obtained a postgraduate degree in 1988. 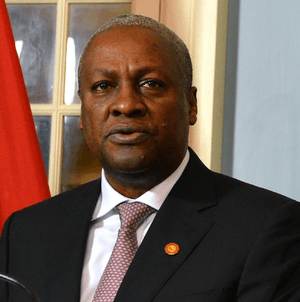 After completing his undergraduate education, Mahama taught History at the secondary school level for a few years. Upon his return to Ghana after studying in Moscow, he worked as the Information, Culture and Research Officer at the Embassy of Japan in Accra between 1991 and 1995. From there he moved to the anti-poverty non-governmental organisation (NGO) Plan International's Ghana Country Office, where he worked as International Relations, Sponsorship Communications and Grants Manager between 1995 and 1996. In 1993, he participated in a professional training course for Overseas Public Relations Staff, organized by the Japanese Ministry of Foreign Affairs in Tokyo. He also participated in a management development course organized by Plan International (RESA) in Nairobi, Kenya. 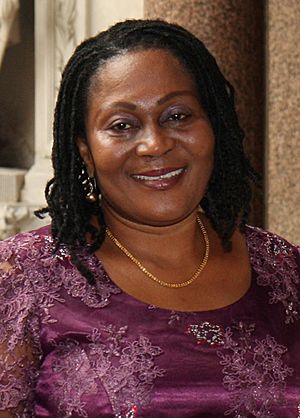 John Dramani Mahama is married to Lordina Mahama (née Effah, 6 March 1963). Mahama has five children. He is a Christian, born and raised a Presbyterian but is now a member of Assemblies of God, Ghana due to marriage. His family is multi-faith, consisting of Christians and Muslims. Being a staunch campaigner for sustainability, he has a keen interest in environmental affairs, particularly the problem of single-use plastic waste pollution in Africa, which he committed himself to addressing during his tenure as Vice President.

Over the course of his career he has written for several newspapers and other publications both locally and internationally. Additionally, he was a featured speaker at the TEDx Great Pacific Garbage Patch Conference in Santa Monica. Mahama is also a devotee of Afrobeat music, especially that of Fela Kuti.

Apart from his hobby of reading, Mahama also has a passionate interest in innovation particularly the use of technology in agriculture being a farmer himself. In particular, he is interested in finding the most effective ways to improve agricultural productivity and works to encourage more young people to see farming as a viable business and not a subsistence activity. This has translated into his passion to see the Savanna Accelerated Development Authority (SADA) create new opportunities for people living in the Savanna areas of the country, which includes the three Northern Regions, and the Volta Region.

Even on official assignments outside of country, Mahama likes to take advantage of opportunities to visit agricultural establishments and update himself on current trends and developments. He also takes keen interest in the opportunities for simplifying and making tasks easier with the use of information and communications technology, and considers the ICT industry one of the sectors that can play a significant role in economic transformation and job creation. He's an avid fan of motor biking and owns about 5 of them.

All content from Kiddle encyclopedia articles (including the article images and facts) can be freely used under Attribution-ShareAlike license, unless stated otherwise. Cite this article:
John Dramani Mahama Facts for Kids. Kiddle Encyclopedia.