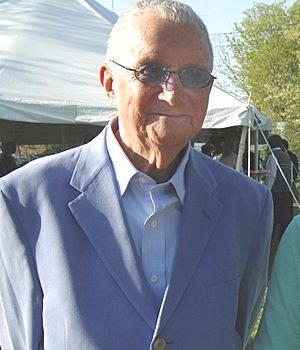 John Paul Hammerschmidt (May 4, 1922 – April 1, 2015) was an American politician from the state of Arkansas. A Republican, Hammerschmidt served for 13 terms in the U.S. House of Representatives from the northwestern Arkansas district before he retired in 1993.

Hammerschmidt was born in Harrison, Arkansas. He studied at the University of Arkansas.

In 1974, a nationally Democratic year, he secured his fifth term by defeating the then 28-year-old future President Bill Clinton.

He was also the first Republican elected to the House of Representatives from Arkansas since Reconstruction.

Hammerschmidt died at a hospital in Springdale, Arkansas from heart and respiratory failure, aged 92.

All content from Kiddle encyclopedia articles (including the article images and facts) can be freely used under Attribution-ShareAlike license, unless stated otherwise. Cite this article:
John Paul Hammerschmidt Facts for Kids. Kiddle Encyclopedia.