Pan Am Flight 103 facts for kids 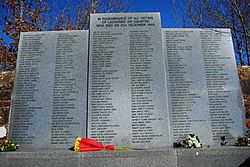 Memorial at the Lockerbie cemetery

Pan Am Flight 103 was a Pan American World Airways passenger flight that flew from London to New York City across the Atlantic Ocean. On 21 December 1988, the aeroplane flying this route was destroyed by a bomb. The explosion killed everybody on the plane. It exploded over Lockerbie, in southern Scotland, and eleven more people on the ground were killed by the falling plane. The event is also known as the Lockerbie bombing.

The aircraft was a Boeing 747–121 named “Clipper Maid of the Seas”. The explosion killed all 243 passengers and 16 crew members. Eleven more people in Lockerbie were killed as large parts of the plane fell in the town and crashed into houses. The total number of people killed in the disaster was 270. After many years of investigation, the attack was blamed on airline officials working for Libya's government. Abdelbaset al-Megrahi, a Libyan man, was convicted of murder over the attack, and later freed as he had deadly cancer. Megrahi died almost three years later. Libyan leader Muammar Gaddafi was also said to have ordered the attack.

The airplane that crashed was a Boeing 747–121, registered N739PA and named Clipper Maid of the Seas and it was was 18 years old.

Flight 103 had originated at Frankfurt Airport, operated by Boeing 727. At London Heathrow Airport, the flight was the changed to a Boeing 747. The aircraft pushed back from the terminal at 18:04 and took off from runway 27R at 18:25, and took off to John F. Kennedy International Airport, and then to Detroit Metropolitan Wayne County Airport.

At 19:02:44 Flight 103 disappeared from air traffic control, then at 19:02:50 then plane returned as five echos instead of one. A British Airways pilot, reported that he could see a huge fire on the ground. The explosion punched a 50-cm (20-inch) hole on the left side of the fuselage. As it descended, the fuselage broke up into smaller pieces, with the section attached to the wings landing first. 200,000 lb (91,000 kg) of jet fuel it contained, ignited, the resulting fireball destroyed several houses and tore a large crater through the center of Lockerbie killing 11 people on the ground.

All 259 passengers and crew and eleven people on the ground died in the crash. Of the 259 people on the plane 190 people were Americans, 43 were British, and many more were represented, with four or fewer passengers per country. Flight 103 was manned by Captain Jim MacQuarrie (55), First Officer Ray Wagner (52), and Flight Engineer Jerry Don Avritt (46). The cabin crew were from Czechoslovakia, the Dominican Republic, France, Norway, the Philippines, Spain, Sweden, West Germany, and the United States.

Members of the Guardians of the Islamic Revolution had destroyed the plane in retaliation for Iran Air Flight 655 being shot down by U.S. forces in the Persian Gulf the previous July.

Muammar Gaddafi admitted Libya's responsibility for the Lockerbie bombing and paid compensation to the victims' families in 2003, though he maintained that he never personally gave the order for the attack.

All content from Kiddle encyclopedia articles (including the article images and facts) can be freely used under Attribution-ShareAlike license, unless stated otherwise. Cite this article:
Pan Am Flight 103 Facts for Kids. Kiddle Encyclopedia.