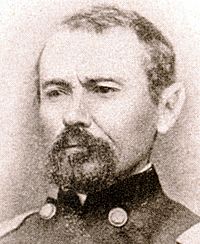 Kenly was born in Baltimore, Maryland. He studied law and was admitted to the bar in 1845, but went to the Mexican–American War as a lieutenant with a company of volunteers he had raised and was later promoted to the rank of major.

As a captain he led a company in the Baltimore-Washington Battalion and wrote a book about his experiences, Memoirs of a Maryland Volunteer. The battalion was part of the division of David E. Twiggs's 1st Division. During the Battle of Monterrey on September 21–24, 1846, Kenly's battalion was involved in heavy fighting and Colonel William H. Watson was killed.

He entered the American Civil War as colonel of the 1st Regiment Maryland Volunteer Infantry organized at Baltimore, Maryland, which was mustered into Union service on May 16, 1861. Together with some Pennsylvania companies, it was captured by Stonewall Jackson, after hard fighting, at Front Royal on the Shenandoah, May 23, 1862. Kenly himself was severely wounded when he was taken prisoner, but his stand had saved General Banks's division at Winchester, and he was raised to the command of a brigade in 1862, which he led at Hagerstown, Harpers Ferry, and elsewhere.

Kenly died in Baltimore, Maryland, and is buried there in Green Mount Cemetery.

All content from Kiddle encyclopedia articles (including the article images and facts) can be freely used under Attribution-ShareAlike license, unless stated otherwise. Cite this article:
John Reese Kenly Facts for Kids. Kiddle Encyclopedia.