Pertwee was born into a theatrical family. After service in the Royal Navy and the Naval Intelligence Division during the Second World War, in his early career he worked as a vaudeville comedian. As an actor, Pertwee appeared in many comedy roles, including four films in the Carry On series. According to The Daily Telegraph, he was known for having "rubbery features and ability to create silly voices".

Pertwee became known for spending 18 years (1959–1977) playing Chief petty officer Pertwee in the popular series The Navy Lark on BBC Radio, as well as starring on television as the Third Doctor in the science-fiction series Doctor Who between 1970 and 1974.

He had further success playing the title character in the television series Worzel Gummidge from 1979 to 1981 (reprising the role from 1987 to 1989). Towards the end of his life, he maintained a close association with Doctor Who by appearing at many fan conventions related to the series, giving interviews and performing to audiences in a one-person show called Who Is Jon Pertwee?. 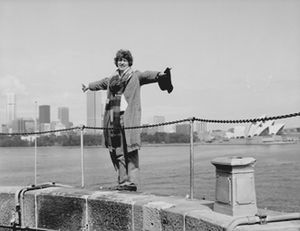 Tom Baker as Dr Who

Born in Chelsea, London, Jon was the son of screenwriter and actor Roland Pertwee. Pertwee was educated at Frensham Heights School, an independent school in Rowledge, near Farnham in Surrey, at Sherborne School in Sherborne in Dorset, and at some other schools from which he was expelled. After school, he went to the Royal Academy of Dramatic Art (RADA), from which he was also expelled after he refused to play a Greek "wind" during one of the lessons, feeling it was a waste of both his time and his father's money.

During the Second World War, Pertwee spent six years in the Royal Navy. He was a crew member of HMS Hood and was transferred off the ship for officer training shortly before she was sunk by the German battleship Bismarck, losing all but three men in May 1941. Later, he was attached to the highly-secretive Naval Intelligence Division, working alongside future James Bond author Ian Fleming, and reporting directly to Prime Minister, Winston Churchill, and Deputy Prime Minister, Clement Attlee. 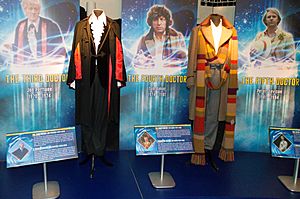 In 1969, Pertwee was selected to take over as the Doctor from Patrick Troughton in the television series Doctor Who. Pertwee played the character as an active crusader with a penchant for action and fancy clothes. He played the Doctor for five seasons from early 1970 to mid-1974, a longer stint than either of his predecessors, the Pertwee era of Doctor Who had 128 episodes.

In early 1974, Pertwee announced he would step down as the Doctor to resume his stage career, also citing typecasting in the role as the reason for leaving. His last full-time appearance in the series was in the story Planet of the Spiders in June 1974, which finished with Tom Baker replacing him in the role. Pertwee's tenure in Doctor Who has been praised by The Daily Telegraph critic Dr. Tim Stanley as "the high point of the programme as a serious piece of science-fiction".

Pertwee later reprised the role in the 20th anniversary story The Five Doctors and the Children in Need story Dimensions in Time, in two radio adventures and on stage in Doctor Who – The Ultimate Adventure. On 14 April 1971, Pertwee was the subject of Thames Television's This Is Your Life. 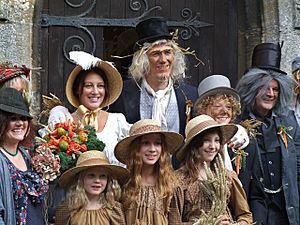 After a stint between 1974 and 1978 as the host of the Thames Television murder-mystery game show Whodunnit?, Pertwee took the starring role in Worzel Gummidge, based on the books written by Barbara Euphan Todd. First aired in 1979, the series saw Pertwee as a scarecrow, as well as using several comedic voices.

The show was an immediate hit and ran on the channel until 1981. The series was picked up by a New Zealand TV network in 1987. Worzel Gummidge Down Under aired for the next two years and was screened in the UK on Channel 4. In 1995, Pertwee played the role one last time in a one-off special for ITV, which celebrated 40 years of the channel. Pertwee played the title character in Worzel Gummidge, the musical, which opened at London's Cambridge Theatre in December 1981. Pertwee also recorded an album, Worzel Gummidge Sings, as well as a Christmas single. 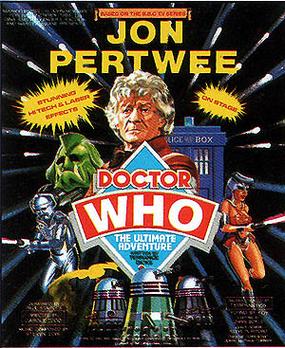 Doctor Who – The Ultimate Adventure was a 1989 stage play

He returned to the role of the Doctor in the 1983 20th anniversary television special The Five Doctors and in the 1993 charity special Dimensions in Time for Children in Need. He also portrayed the Doctor in the stage play Doctor Who – The Ultimate Adventure which toured theatres in the United Kingdom from March to June 1989. In 1993, Pertwee was featured in the unofficial 30th anniversary VHS release of Doctor Who entitled 30 Years of Time Travel and Beyond.

Pertwee's final film role was in a short film entitled Cloud Cuckoo for Scottish Screen, released on 18 June 1994. His last formal television appearance was on Cilla's Surprise, Surprise, broadcast on 21 April 1996. At the date of his death, Pertwee was regularly being seen in the closing moments of an enigmatic UK TV commercial for mobile phone operator Vodafone: dressed somewhat in his flamboyant 'Doctor' manner. His character walked wordlessly across an alleyway in sight of a Liverpool landmark, and entered a garage evidently containing some kind of 'time machine'. 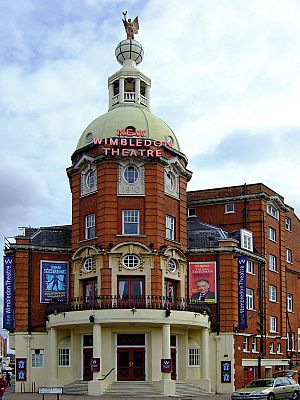 Pertwee continued on the Doctor Who convention circuit, and with his voice and television acting, until his death; he died in his sleep from a heart attack in Connecticut on 20 May 1996, at the age of 76. He was survived by his wife Ingeborg Rhoesa, and two children who had followed him into the acting profession, Sean Pertwee and Dariel Pertwee.

His immediate successor in the starring role of Doctor Who, Tom Baker, paid tribute, saying: "I am very sorry to hear the news. I was a great admirer of such a stylish actor." Another of his successors in the role, Colin Baker, said: "He was a man of such presence and stature. I can't believe he has gone – it is a great shock. Of all of the interpretations of the Doctors his was the most straight in terms of avoiding comedy." His body was cremated at Putney Vale Crematorium with a toy Worzel Gummidge affixed to the coffin, following the instructions in his will.

His death came six days after the American broadcast of the Doctor Who television film, which used in its opening credits a logo based on that from his era of the television series. The BBC broadcast of the film, on 27 May 1996, featured a dedication to Pertwee at its end.

Several figurines of Pertwee's Doctor have been released as part of the Doctor Who action figure range. In 2016, his work was honoured with a blue plaque at the New Wimbledon Theatre, which was arranged by the Doctor Who Appreciation Society.

All content from Kiddle encyclopedia articles (including the article images and facts) can be freely used under Attribution-ShareAlike license, unless stated otherwise. Cite this article:
Jon Pertwee Facts for Kids. Kiddle Encyclopedia.