This is a Portuguese name; the first family name is da Rocha and the second is Fonte.

Fonte started his professional career with Sporting CP B, moving to England with Crystal Palace in 2007. He signed for Southampton in 2010, where he made 288 appearances in all competitions, until he joined West Ham United in January 2017. He then represented Dalian Yifang in China and Lille in France, winning the Ligue 1 title with the latter in the 2020–21 season.

A Portuguese international since age 30, Fonte was part of the squad at two UEFA European Championship and the 2018 FIFA World Cup, winning UEFA Euro 2016.

Born in Penafiel, Fonte finished his football education (after already having played there from ages 10 to 13) at Sporting CP. He only appeared with Sporting CP B as a senior, in the third division. He signed with Salgueiros in 2004, but the club was in severe financial difficulties and was liquidated shortly thereafter; as a result, he terminated his contract and transferred to Felgueiras in the Segunda Liga.

In the 2005 off-season, Fonte made his Primeira Liga debut with Vitória de Setúbal, where his performances attracted the eye of Benfica, who signed him in January 2006. He was immediately loaned out to fellow league team Paços de Ferreira. He finished the season with 26 league appearances and 1 goal, during a 2–2 away draw against Penafiel in which he also scored two in his own net– as both Paços and Setúbal managed to retain their status.

Fonte spent the 2006–07 season on loan to Estrela da Amadora, still in the top division, only missing five league games as the Lisbon-based club finished in ninth position.

In July 2007, Fonte moved on loan to Crystal Palace in England, being introduced in the team's starting line-up after a run of injuries. The move was made permanent at the end of the 2007–08 season, as Palace finished fifth and qualified to the promotion play-offs.

Fonte continued to feature regularly with the Londoners in the Football League Championship, even appearing as a makeshift striker when required. 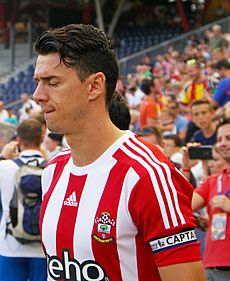 Fonte playing for Southampton in 2017

Fonte signed for Southampton on 9 January 2010 for a fee believed to be around the region of £1.2 million, signing a three-and-a-half-year contract. He made his debut one week later alongside two other recent signings, Jon Otsemobor and Danny Seaborne, in a 1–1 draw away to Millwall. His first goal for Southampton came on 28 August, in a 4–0 away win over Bristol Rovers.

After scoring seven league goals and helping Southampton win promotion to the second tier, Fonte was named in the League One Team of the Year for the 2010–11 season. He was also voted Southampton's Player of Year, achieving 64% of the vote, with Adam Lallana coming second with 18% and Dan Harding finishing third with 7%.

On 29 December 2011, Fonte signed a new contract keeping him at the club until June 2015. Southampton were top of the table when he signed, with the player having appeared in every league game at that point in the season. He eventually contributed 42 matches and 1 goal, which came against Coventry City in the final match of the season as the team earned a second consecutive promotion.

Fonte made his debut in the Premier League on 19 August 2012, playing the full 90 minutes in a 3–2 away loss to Manchester City. He netted his first goals in the competition in a 2–2 home draw with Fulham on 7 October, the second arriving in the last minute. On 24 August 2013, he scored a header in the 89th minute of the home game against Sunderland, rescuing a point for his team.

On 23 January 2014, Fonte was attacked by teammate Dani Osvaldo during a training session. Subsequently, the latter was loaned out to Juventus during the winter transfer window.

On 8 August 2014, Fonte penned a new three-year deal with Southampton running until June 2017, and was also named team captain. He made his 250th league appearance for the club on 16 October 2016, in a 3–1 home win against Burnley.

On 20 January 2017, Fonte signed for Premier League club West Ham United for a reported fee of £8 million (plus potential add-ons) on a two-and-a-half-year contract. He made his league debut on 1 February, in a 4–0 home defeat by Manchester City in which he conceded a penalty by bringing down Raheem Sterling.

On 4 November 2017, after a league match against one of his former teams, Crystal Palace, it was confirmed Fonte had suffered a foot injury that would sideline him for the rest of the year.

Fonte completed a transfer to Chinese Super League club Dalian Yifang on 23 February 2018, joining for a reported fee of £5 million. On 15 July, he terminated his contract. 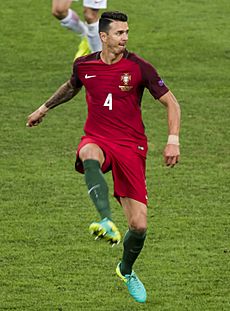 Fonte was called up to the Portuguese B squad for the Vale do Tejo tournament in 2006. On 24 January, he played against Slovenia as the match ended with a penalty shoot-out loss after a 1–1 draw.

On 3 October 2014, aged nearly 31, Fonte received his first call-up to the senior team, for a friendly with France and a UEFA Euro 2016 qualifier against Denmark. He made his debut in another friendly, playing the second half of a 1–0 win over Argentina at Old Trafford on 18 November.

Fonte was selected by manager Fernando Santos for his Euro 2016 squad. His first game in the tournament took place on 25 June, as he started alongside Southampton teammate Cédric Soares in the round-of-16 tie against Croatia, which Portugal won 1–0 after extra time. He went on to retain his position until the final, in which Portugal beat the hosts France 1–0.

Fonte was named in the final 23-man squad for the 2018 FIFA World Cup in Russia.

Fonte's younger brother, Rui, is also a footballer. A forward, the two were teammates at Sporting (at youth level), Crystal Palace and Lille. Their father, Artur, played 12 seasons in the Portuguese top division.

All content from Kiddle encyclopedia articles (including the article images and facts) can be freely used under Attribution-ShareAlike license, unless stated otherwise. Cite this article:
José Fonte Facts for Kids. Kiddle Encyclopedia.