Helen Joy Davidman (18 April 1915 – 13 July 1960) was an American poet and writer. Davidman was a child prodigy, who scored above 150 on IQ testing, with exceptional critical, analytical and musical skills. She earned a master's degree from Columbia University in English literature in 1935. For her book of poems, Letter to a Comrade, she won the Yale Series of Younger Poets Competition in 1938 and the Russell Loines Award for Poetry in 1939. She was the author of several books, including two novels.

While an atheist and after becoming a member of the American Communist Party, she met and married her first husband and father of her two sons, William Lindsay Gresham, in 1942. After a troubled marriage, and following her conversion to Christianity, they divorced and she left America to travel to England with her sons. 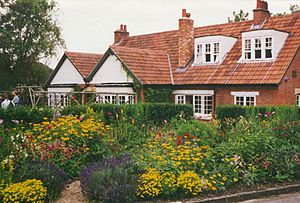 The Kilns, the Lewis home in Oxford

Davidman published her best known work, Smoke on the Mountain: An Interpretation of the Ten Commandments, in 1954 with a preface by C. S. Lewis. Lewis influenced her work and conversion, and became her second husband after her permanent relocation to England in 1956. She died from metastatic carcinoma involving the bones in 1960.

The relationship that developed between Davidman and Lewis has been featured in a television BBC film, a stage play, and a theatrical film named Shadowlands. Lewis published A Grief Observed in 1961, from notebooks he kept after his wife's death.

All content from Kiddle encyclopedia articles (including the article images and facts) can be freely used under Attribution-ShareAlike license, unless stated otherwise. Cite this article:
Joy Davidman Facts for Kids. Kiddle Encyclopedia.