Kids Encyclopedia Facts
Not to be confused with Judith English. 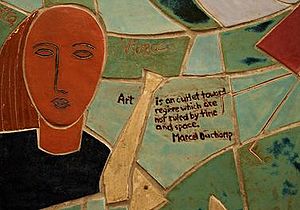 Detail of a public artwork by Inglese, featuring a tribute to Marcel Duchamp.

Judith Inglese is an American artist known for her large public ceramic murals and her illustrations in the children's books of Dedie King. She is the daughter of Frank Caplan and Theresa Caplan, the founders of Creative Playthings.

Juditih Inglese received her Bachelor of Arts from Sarah Lawrence College and studied ceramics and sculpture at the Accademia de Belle Arti, Rome and School of the Museum of Fine Arts, Boston. She lives in Leverett, Massachusetts.

Inglese creates ceramic tile murals that are in bas-relief. Inglese hand-cuts and glazes the ceramic tiles, fitting together the tiles like a puzzle upon placing the mural in its final location. She has created major public art works for the National Zoo in Washington, D.C., as well as at hospitals, recreational facilities, libraries, and other public venues throughout the country.

Public artworks by Inglese include:

Inglese has worked with children's author Dedie King to create a series of books that depict cultural elements of a specific country as seen through the eyes of a child narrator, called I See the Sun. The books are published in English and in the language of the country the child lives in, including Mandarin Chinese. The books began being published in 2010 by Satya House Publications. In 2010, I See the Sun in China won an award from Creative Child magazine as well as the Teachers Choice Award for the Family.

Books illustrated by Inglese include:

All content from Kiddle encyclopedia articles (including the article images and facts) can be freely used under Attribution-ShareAlike license, unless stated otherwise. Cite this article:
Judith Inglese Facts for Kids. Kiddle Encyclopedia.