Kutch literally means something which intermittently becomes wet and dry; a large part of this district is known as Rann of Kutch which is shallow wetland which submerges in water during the rainy season and becomes dry during other seasons. The same word is also used in Sanskrit origin for a tortoise. The Rann is famous for its marshy salt flats which become snow white after the shallow water dries up each season before the monsoon rains. 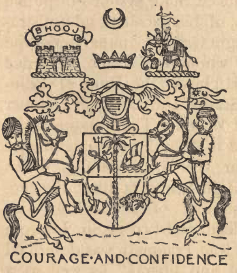 Coat of arms of the Indian princely state of Kutch 1893

The district is also famous for ecologically important Banni grasslands with their seasonal marshy wetlands which form the outer belt of the Rann of Kutch.

Kutch District is surrounded by the Gulf of Kutch and the Arabian Sea in south and west, while northern and eastern parts are surrounded by the Great and Little Rann (seasonal wetlands) of Kutch. When there were not many dams built on its rivers, the Rann of Kutch remained wetlands for a large part of the year. Even today, the region remains wet for a major part of year. 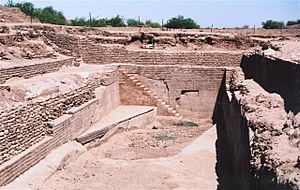 One of the water reservoirs at Dholavira

There are ninety-seven small rivers in Kutch District, most of which flow into the Arabian Sea, but some of which feed the Rann of Kutch. Twenty major dams, and numerous smaller dams, capture the rainy season runoff. While most of these dams do not affect the Ranns, storage of rainy season water upstream from Kutch and its use in irrigation has resulted in less fresh water coming into the Ranns of Kutch during the rainy season. Water remains a serious issue in Kutch. Kutch's thirst for water is satisfied by Narmada river flowing from Sardar Sarovar dam. 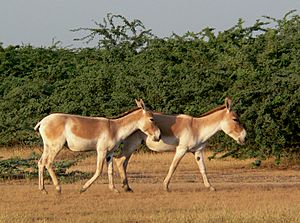 All content from Kiddle encyclopedia articles (including the article images and facts) can be freely used under Attribution-ShareAlike license, unless stated otherwise. Cite this article:
Kachchh District Facts for Kids. Kiddle Encyclopedia.