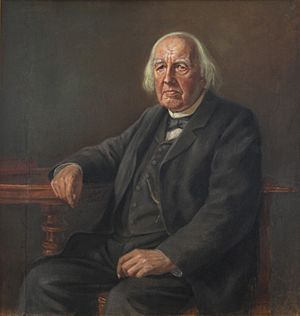 Karl Theodor Wilhelm Weierstraß (31 October 1815 - 19 February 1897) was a German mathematician. Most of his work is about using logic as a foundation of analysis. He mainly used power series for this. He also provided foundations for Elliptic functions, Differential geometry and the calculus of variations. Bolzano-Weierstrass theorem is named in his honour: According to the theroem, finite series have certain properties: Finite convergent series of complex numbers have at least one limit point, those of real numbers have at least two.

All content from Kiddle encyclopedia articles (including the article images and facts) can be freely used under Attribution-ShareAlike license, unless stated otherwise. Cite this article:
Karl Weierstraß Facts for Kids. Kiddle Encyclopedia.