Kids Encyclopedia Facts
This is an overview of the idea of a limit in mathematics. For specific uses of a limit, see limit of a sequence and limit of a function.

In mathematics, a limit is an anticipated value of a function or sequence based on the points around it. As a function performs operations on different inputs, this can cause strange results with certain numbers, especially if we try to plot them on a Cartesian graph; limits are a way of explaining what happens in these cases.

Limits are used to define many topics in calculus, like continuity, derivatives, and integrals.

For a function f, limit are written like this:

which reads "the limit of f of x, as x approaches c equals L". An alternative notation is "

". Limit is shortened to lim. 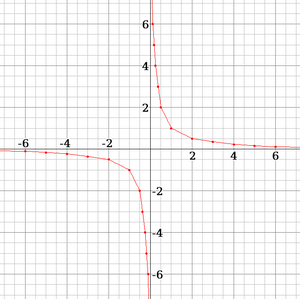 . Note that the line doesn't touch 0 on either axis as

Imagine we have a function that takes an input,

. If we were to draw a graph using x and y as coordinates, the results would look like this:

As we can see here, division by zero is undefined. But if we look closer, then we can see that we still have valid output—as long as we never reach zero:

This problem is unique to zero as the function still works on every value up to zero, even if we approach from the negative side. As input numbers get arbitrarily small, the output will simply get arbitrarily large, and if we draw this on a graph, the line will stretch upwards without bound before it touches 0 on either axis.

One way we describe this is "The limit of

approaches 0, from the right side, is

can keep increasing beyond bounds, as long as x doesn't reach 0. Mathematically, this is written as:

While a limit cannot be reached, it can be approached to get a more accurate output value. For example, the mathematical constant

(Euler's number) can be found by calculating

While the equation will never be equal to

, putting in a larger input will get us closer to it, and make our output more accurate. Mathematically, we can express this by saying that "The limit of

", which is noted as

All content from Kiddle encyclopedia articles (including the article images and facts) can be freely used under Attribution-ShareAlike license, unless stated otherwise. Cite this article:
Limit (mathematics) Facts for Kids. Kiddle Encyclopedia.