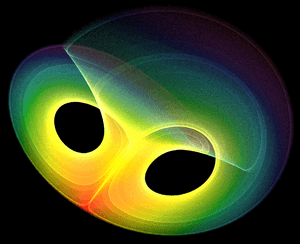 Gottfried Wilhelm Leibniz and Isaac Newton developed most of the basis of mathematical analysis.

is never zero, but as n gets bigger

gets close to zero. The limit of

as n gets bigger is zero. It is usually said "The limit of

as n goes to infinity is zero". It is written as

The counterpart would be

gets bigger, the limit goes to infinity. It is written as

The fundamental theorem of algebra can be proven from some basic results in complex analysis. It says that every polynomial

with real or complex coefficients has a complex root. A root is a number x which gives a solution

. Some of these roots may be the same.

is a line. The

shows the slope of the function and the

shows the position of the function on the ordinate. With two points on the line, it is possible to calculate the slope

A function of the form

, which is not linear, cannot be calculated like above. It is only possible to calculate the slope by using tangents and secants. The secant passes through two points and when the two points get closer, it turns into a tangent.

The new formula is

This is called difference quotient. The

gets now closer to

. This can be expressed with the following formula:

The integration is about the calculation of areas.

is read as "the integral of f, from a to b" and refers to the area between the x-axis, the graph of function f, and the lines x=a and x=b. The

is the point where the area should start and the

where the area ends.

Some topics in analysis are:

Some useful ideas in analysis are:

All content from Kiddle encyclopedia articles (including the article images and facts) can be freely used under Attribution-ShareAlike license, unless stated otherwise. Cite this article:
Mathematical analysis Facts for Kids. Kiddle Encyclopedia.