The Karolinska Institute, sometimes known as the (Royal) Caroline Institute in english is a research-led medical university in Solna within the Stockholm urban area of Sweden. It covers areas such as biochemistry, genetics, pharmacology, pathology, anatomy, physiology and medical microbiology, among others. It is recognised as Sweden's best university and one of the largest, most prestigious medical universities in the world. It is the highest ranked in all Scandinavia. The Nobel Assembly at the Karolinska Institute awards the Nobel Prize in Physiology or Medicine.

The Karolinska Institute is Sweden's third oldest medical school. It is one of Sweden's largest centres for training and research, accounting for 30% of the medical training and more than 40% of all academic medical and life science research conducted in Sweden. The Karolinska University Hospital, is associated with the university as a research and teaching hospital. Together they form an academic health science centre. While most of the medical programs are taught in Swedish, the bulk of the Ph.D. projects are conducted in English. The institute's name is a reference to the Caroleans. 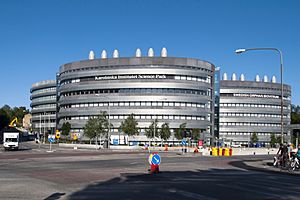 In 1861 the institute reached a significant milestone in being awarded the right to confer its own degrees; as such it was granted a status equal to that of a university. This, in turn, led to an increase in the size of the student body, necessitating the demolition of the old building on the Glasbruk plot and its replacement with a new, larger one. This new institute building was built in stages, mostly during the 1880s and into the first decade of the 20th century; it stands to this day, and has remained largely unchanged since its opening. 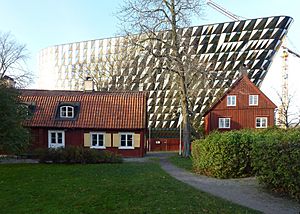 The Stenbrottet farm with Karolinska Institute's new aula in the background

Just five years later, following the death of Alfred Nobel in 1895, the Karolinska Institute received the right to select the recipient of the Nobel Prize in Physiology or Medicine. Since then, this assignment has given the Karolinska Institute a broad contact network in the field of medical science. Indeed, over the years, five of the institute's own researchers have been awarded the Nobel Prize in Physiology or Medicine.

The year 1997 marked a major point in the history of the Karolinska Institute as it was finally granted official university status with a stated mission to "contribute to the improvement of human health through research, education and information". This newly acquired status later led to the incorporation of the Stockholm University of Health Sciences into KI, as a result of which seven new study programmes in occupational therapy, audionomy, midwifery, biomedical laboratory science, nursing, radiology nursing and dental hygiene, were added to the teaching portfolio.

The year 2010 marked yet another significant event in the history of the KI as the institute celebrated its 200th anniversary under the patronage of King Carl XVI Gustaf. 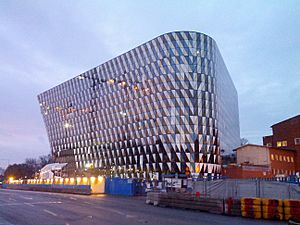 The Karolinska Institute offers the widest range of medical education under one roof in Sweden. Several of the programmes include clinical training or other training within the healthcare system. The close proximity of the Karolinska University Hospital and other teaching hospitals in the Stockholm area thus plays an important role during the education. Approximately 6,000 full-time students are taking educational and single subject courses at Bachelor and Master levels at the Karolinska Institute. Annually, 20 upper high school students from all over Sweden get selected to attend Karolinska's 7-week long biomedical summer research school.

All content from Kiddle encyclopedia articles (including the article images and facts) can be freely used under Attribution-ShareAlike license, unless stated otherwise. Cite this article:
Karolinska Institutet Facts for Kids. Kiddle Encyclopedia.