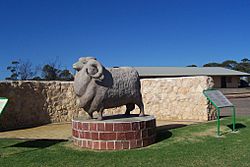 Karoonda was founded on wheat growing early in the 20th century (proclaimed on 11 December 1913), but the cleared land is also suitable for raising merino sheep. The Karoonda Development Group instigated and built a larger-than-life sculpture of a Merino ram in the park in the main street to emphasise this. There are even seats with rams heads dotted around the town. A number of other agricultural and horticultural industries are now also represented in the district. Each year the Karoonda Farm Fair is held, a two-day event attracting over 10,000 visitors to the town.

Karoonda briefly shot to international fame in 1930 when a meteorite fell to earth just to the east of the town on the night of 25 November.

Karoonda is in the District Council of Karoonda East Murray, the state electorate of Chaffey and the federal Division of Barker.

Pioneer Park on East Terrace is being developed as a Malleelands Pioneer Railways and farm museum, with displays of harvest machinery, plows, railway rolling stock and facilities already in place. The Nature Trail & Bush Walk is adjacent.

The Lowaldie railway station was 6.25 miles (10.06 km) east of Karoonda and also had a small town surveyed, with a school and post office operating for some time. These have all closed, and the former institute building is used as a private residence. The station was originally named Lowalde in 1913, but when the town was proclaimed in 1914, the spelling used was Lowaldie. The name is derived from a Ngarrindjeri word meaning summer.

All content from Kiddle encyclopedia articles (including the article images and facts) can be freely used under Attribution-ShareAlike license, unless stated otherwise. Cite this article:
Karoonda, South Australia Facts for Kids. Kiddle Encyclopedia.