Kemnay is a village 16 miles (26 km) west of Aberdeen in Garioch, Aberdeenshire, Scotland. With a population of 3,830 residents aged 16 or over (2012), Kemnay is the third largest settlement in the Garioch.

The village name Kemnay is believed to originate from the Celtic words that mean "little crook in the river" due to the villages location on the bend of the River Don. Kemnay House is classified by Historic Scotland as a category A listed building. 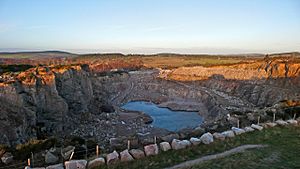 Kemnay Quarry was opened in 1830 by John Fyfe, and became commercial in 1858. Kemnay Granite has been used in many famous buildings and structures, including;

Granite workers from Kemnay helped to quarry and shape the Australian granite used in the Sydney Harbour Bridge. They also travelled to quarries in California, the Mississippi Levees and Odessa. 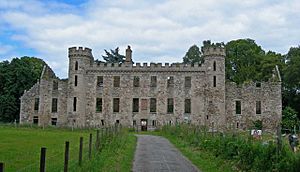 Kemnay is popular with explorers of Aberdeenshire who can stay in numerous guest houses, hotels, and bed and breakfasts within the village. There are two pubs, the Bennachie Lodge and the Burnett Arms Hotel.

All content from Kiddle encyclopedia articles (including the article images and facts) can be freely used under Attribution-ShareAlike license, unless stated otherwise. Cite this article:
Kemnay Facts for Kids. Kiddle Encyclopedia.