Kinbrae is a city in Nobles County, Minnesota, United States. The population was 12 at the 2010 census. It is the third smallest city, by population, in Minnesota. 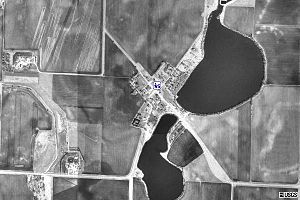 According to the United States Census Bureau, the city has a total area of 1.01 square miles (2.62 km2), of which, 0.87 square miles (2.25 km2) is land and 0.14 square miles (0.36 km2) is water. The town is located in the far northeastern corner of Nobles County. Kinbrae lies one mile east of Jackson County, and one mile south of Murrary County. 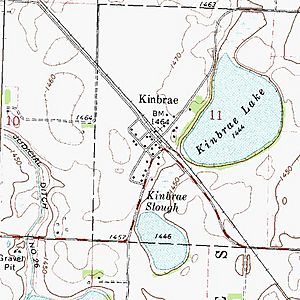 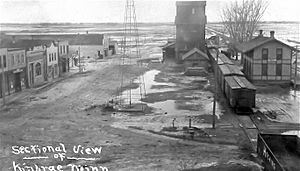 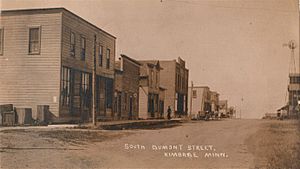 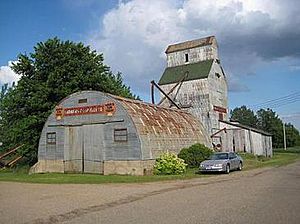 Site selections: In the year 1879, the Southern Minnesota Railroad began building a route from Heron Lake, to Fulda. A rail station was proposed for the Graham Lakes region, and the site selected was briefly named Airlie in honor of David Ogilvy, the 10th Earl of Airlie. The Earl was president of the Dundee Improvement company, a Scottish company formed for the purpose of founding a town in southwest Minnesota. In September and October 1879, Oglivy's company built a steam elevator with a capacity of 16,000 bushels, a hotel, and a general store building in Airlie. The Dundee Improvement company played no role in founding the nearby town of Dundee. In fact, the towns of Kinbrae (Airlie) and Dundee, though separated by a mere 1/2 mile, were rivals, built along the roads of competing rail lines.

Change of name: When the site was surveyed in December 1879, Airlie was formally rechristened DeForest. A depot and a post office were both constructed in 1880 even though the census showed a mere 19 residents. The depot was known as DeForest Station, but the post office was known as Airlie until January 1882 when the name was formally changed to DeForest. The steam elevator was wiped out by fire on April 20, 1883, and this spelled the end of the Dundee Improvement Company's involvement. As a historical footnote, David Ogilvy's granddaughter Clementine Hozier was married to Winston Churchill from 1908 until his death in 1965.

Kinbrae: In August 1883, DeForest Station, the townsite, and the post office were renamed Kinbrae. Little is known about the name Kinbrae, other than that it is Scottish. Ownership of Kinbrae passed into the hands of Hanson & Graeger, a Chicago land-colonization firm, but the company showed little interest in development of the new town. The townsite was then sold to W. N. Bickley and W. E. Fletcher in 1895, who made great efforts "to boom the town," or to attract businesses and residents. By 1896, Kinbrae boasted two general stores, a hardware store, a lumber yard, two elevators, a blacksmith shop, a hotel, a bank, a creamery, two churches (Methodist and Presbyterian), and a school.

Incorporation: The town was incorporated on February 17, 1896, and the first village president was a Mr. L. F. Miller. The census of 1900 gave Kinbrae a population of 137. Kinbrae's post office was discontinued in the year 1971, and by the year 2000, the town had a mere 21 residents. Population estimates from 2007 put the number of residents at 17. Kinbrae citizens briefly considered disincorporation in the year 2010, but elected to remain a municipality however small.

All content from Kiddle encyclopedia articles (including the article images and facts) can be freely used under Attribution-ShareAlike license, unless stated otherwise. Cite this article:
Kinbrae, Minnesota Facts for Kids. Kiddle Encyclopedia.