Dundee is a city in Nobles County, Minnesota, United States The population was 68 at the 2010 census. 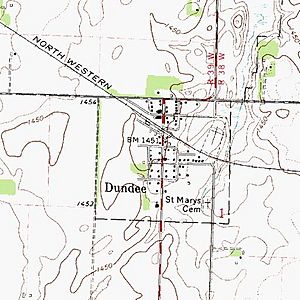 According to the United States Census Bureau, the city has a total area of 0.31 square miles (0.80 km2), all of it land. Dundee is located in the extreme northeastern corner of Nobles County. The Murray County line defines Dundee's northern border, and the Jackson County line defines its eastern border. 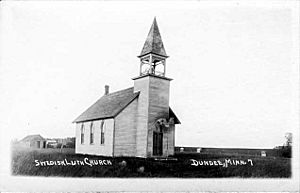 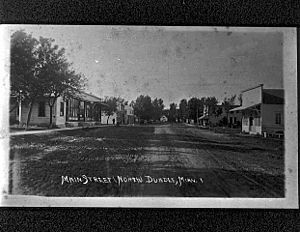 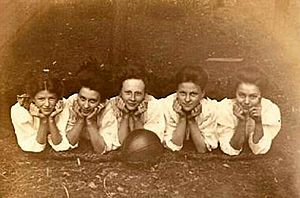 Dundee was established in 1879 when the St. Paul and Sioux City Railway Company built a branch line, then known as the Heron Lake & Black Hills Railroad. The first station out of Heron Lake was proposed in the extreme northeastern corner of Nobles County, and was originally named Warren, in honor of Joseph Warren who fell at the Battle of Bunker Hill. The town was surveyed and platted in July 1879, and construction of a depot began on August 13. Mr. G. Foils moved to town and assumed duties of stationmaster on September 1. He was also named postmaster when a post office was established on November 1, 1879. It was at this time that the name was changed to Dundee, after the city of Dundee, Scotland. The reason for the name change is lost to history, although it is known that stationmaster/postmaster G. Foils (whose first name is also lost to history) made the change. A Scottish Company known as the Dundee Improvement Company was then financing construction of an elevator, general store, and hotel in nearby Kinbrae, and perhaps Mr. Foils thought he could attract investment in Dundee. The first business was opened in the spring of 1880 by F. D. Lindquist and H. A. Scherlie. Several homes were also built in that second year, but real growth for Dundee did not occur until the late-nineties when the country began to recover from the Panic of 1893. A census taken on December 23, 1897, gave the village a population of 187. At this time, citizens petitioned for incorporation, and on January 4, 1898, the county commissioners granted their request. A special election was held on February 15, and on March 11, 1898, the Dundee council met for the first time. F. D. Lindquist was named village president.

There were 40 households of which 12.5% had children under the age of 18 living with them, 42.5% were married couples living together, and 57.5% were non-families. 52.5% of all households were made up of individuals and 22.5% had someone living alone who was 65 years of age or older. The average household size was 1.70 and the average family size was 2.53.

There were 51 households out of which 17.6% had children under the age of 18 living with them, 47.1% were married couples living together, 3.9% had a female householder with no husband present, and 47.1% were non-families. 47.1% of all households were made up of individuals and 27.5% had someone living alone who was 65 years of age or older. The average household size was 2.00 and the average family size was 2.85.

All content from Kiddle encyclopedia articles (including the article images and facts) can be freely used under Attribution-ShareAlike license, unless stated otherwise. Cite this article:
Dundee, Minnesota Facts for Kids. Kiddle Encyclopedia.